Two friends of mine invited me to their wedding in Slovenia so I took the opportunity to be open to any adventures that may come. I booked a one-way ticket to Venice and that is how I ended up in Trieste. Trieste is semi-between Venice and Ljubljana and is a cute port city with a complex history (typical Europe).

So I made a few travel mistakes; like almost forgetting to get off the train in Trieste because I was just enjoying being on a train, and then I decided to walk to my accommodation thinking it wasn’t that far (we have all done it, haven’t we?). You know what? I didn’t let any of this get to me. I was more excited about the fact that I was traveling solo in Italy for my first time. Although my Italian is limited, I felt like it was enough to unlock a few travel gems.

Now let me tell you about one of the best meals I’ve ever eaten and a castle that is so magical you wish it was your own.

Due to the very complex history of Trieste what exists today is a beautiful mix of Italian, Austro-Hungarian, and Slovenian influence. Most travelers, like myself, use Trieste as a small stop on a larger tour in Europe. Since this city is small, you only need one or two days. I say two, because it does take time to see Miramare Castle and if you go to Trieste, consider it a must.

Piazza Unità d’Italia is Europe’s largest square located next to the sea. Interestingly, Slovenes locally refer to it as Veliki trg (Great Square). 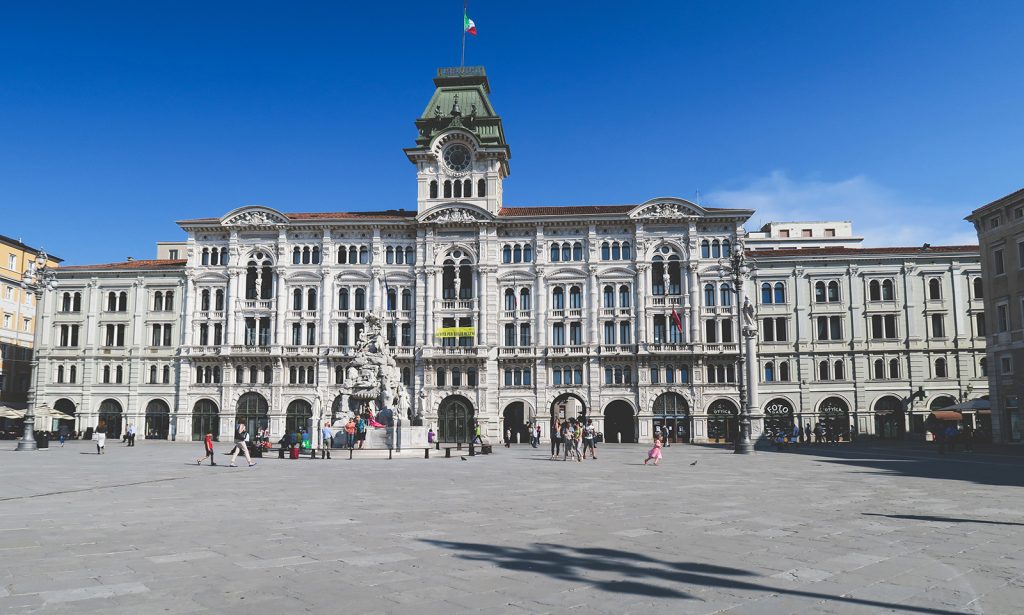 During the 19th century this was the economic center of Trieste, and can be found adjacent to Piazza Unità d’Italia. Now this building houses the Chamber of Commerce but previously was the Stock Exchange.

Of course, if you go to Trieste I would advise that you go to San Giusto Hill. Here you can see the old castle/fortress, Roman ruins, museums, and the Cathedral of San Giusto (which has some very stunning mosaics). I have a severe lack of photos from this area, and now that I think back to being there I ran into a few American travelers and we spent a lot of time chatting and exploring the area together. Good thing I live close now!

Molo Audace is a massive stone pier, as you can see below, named after the Italian Navy destroyer Audace. There is nothing on the pier, but you can walk around on it which is pretty cool!

A Roman amphitheater dating to about 1st century. This little archaeological gem is just between buildings which is an interesting juxtaposition for something thousands of years old. It is located between the Piazza Unità d’Italia and San Giusto Hill so it is an easy stop when walking around Trieste.

While this canal is not even comparable to Venice’s Canal Grande it is still a cute spot to wander. I may have eaten a few cups of gelato here.

Of course there is more that I missed such as the Trieste Cathedral, the Revoltella Museum (modern art gallery), and the Museo Sartorio (museum of ceramics, porcelain, etc inside a villa).

A rare treat for me, and this blog, a 19th-century castle. This beauty was built in 1860 and was inspired by the artistic interest of archduke, Ferdinand Maximillian. He was never able to enjoy the castle after the interiors were complete because he was executed in Mexico for attempting to establish a monarchy in Mexico.

This castle was built to be a private residence, and this was definitely reflected in the decorated rooms. I particularly enjoyed the archduke’s office, which is a reproduction of part of the ship he commanded in the navy.

During WWI all of the furniture and works of art were moved to Vienna. If you recall from earlier in this article, Trieste became part of Italy at this time, this also meant Miramare Castle. In 1929 they returned the items so the castle could be restored to its original state.

While this is a really beautiful castle I always feel that internal conflict that these are monuments to wealth and oppression, in many cases. This castle was subsequently occupied and used by various countries often during times of war. It is rather impressive that most of the interiors and castle itself did not suffer damage during either wars even in spite of its complex location.

What to eat in Trieste

Food is one of my favorite parts of travel. Most might think it is castles or cool old buildings, those are bonuses for me, food is where the magic happens. Food is where you can learn so much about a culture and history and experience what locals experience! I don’t give restaurant recommendations often. This is because usually I find them pointless because we all have different taste

If you do go to Trieste and would love an intimate meal with local products and recipes then you must try Trattoria da Mara (Via Vittoria Colonna 5, 34124, Trieste, Italy) . This restaurant was recommended to me by a local and I was blown away by the entire experience. Mara prepares and cooks everything, and she told me that her sister actually grows all of the food on her farm. A word of advice, if you don’t speak a word of Italian try to have a dictionary/app on hand (My favorite foreign language dictionary app is Pons).

I do the dirty work for you! I already created a map with all of the listed locations and a few additional to help you with your trip to Trieste. Click the star next to Trieste, Italy to save this map to your account.

Traveling Between Trieste and Ljubljana

If you are staying in Ljubljana and want to take a day trip to Italy then Trieste is a great choice for a low key day, especially when compared to Venice. The easiest way of course would be to drive (approximately 1 hour 15 minutes) but not everyone rents a car when traveling so here are a few other options to get you from Ljubljana and Trieste and back.

I first used GoOpti back in 2015 the first time I traveled to Slovenia and they are affordable and reliable. I still use them to this day if I need to get to the Venice Airport. If you use my referral link you will get €5 off your first ride! There are no set prices with GoOpti but rather the sooner you book and the more flexible you are then the cheaper your seat will be.

If you are like me and a fan of train travel then you can check out Slovenske železnice for daily time tables. There are two routes each day between Ljubljana and Trieste so you can leave Ljubljana on the 5:57 train and make it to Trieste by 8:39 and return back on the 19:09 and be in Ljubljana by 21:48. It is a long day but still possible for those on a tight schedule. 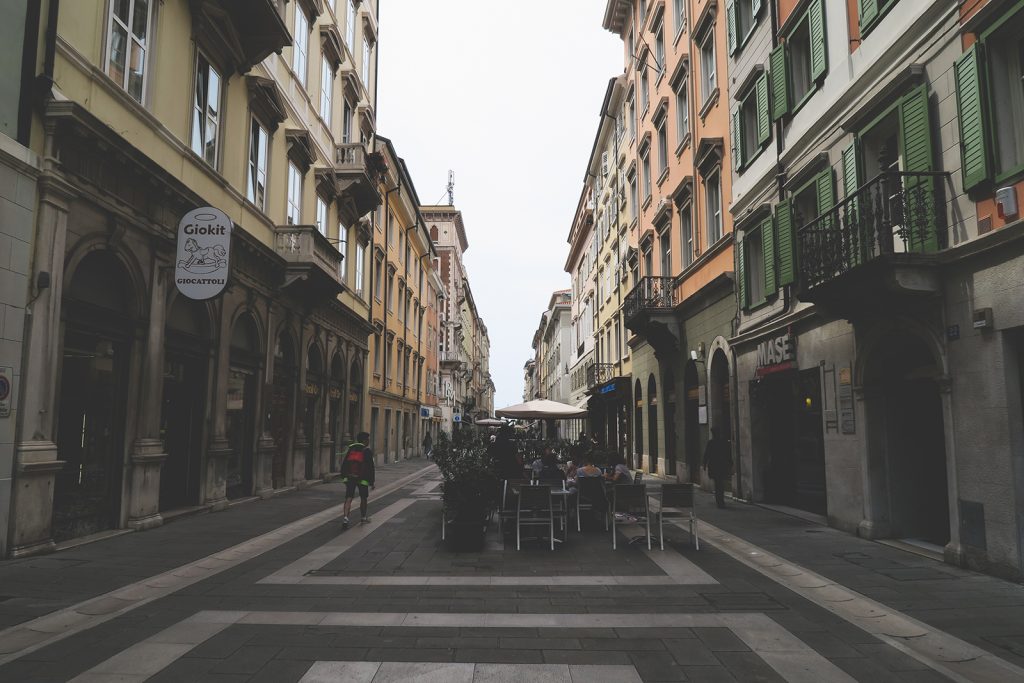 Probably the most flexible and cheapest way is by bus. GoEuro is a great site that can show you all of the major bus lines. Through a quick search I found a round trip with Flixbus for only €16 that leaves at a much more pleasant hour than the train (haha).

Of course I did not exhaust all of the options as there are endless ways to get from point A to point B but I hope this helped for those who need a quick and easy solution. Alternatively, like myself, you can use Trieste as a mid-point between Italy and Slovenia. You can easily access the rest of Italy from Trieste via local trains which are quite inexpensive.

4 thoughts on “Visit Trieste: A Guide from Ancient Rome to Modern Times”