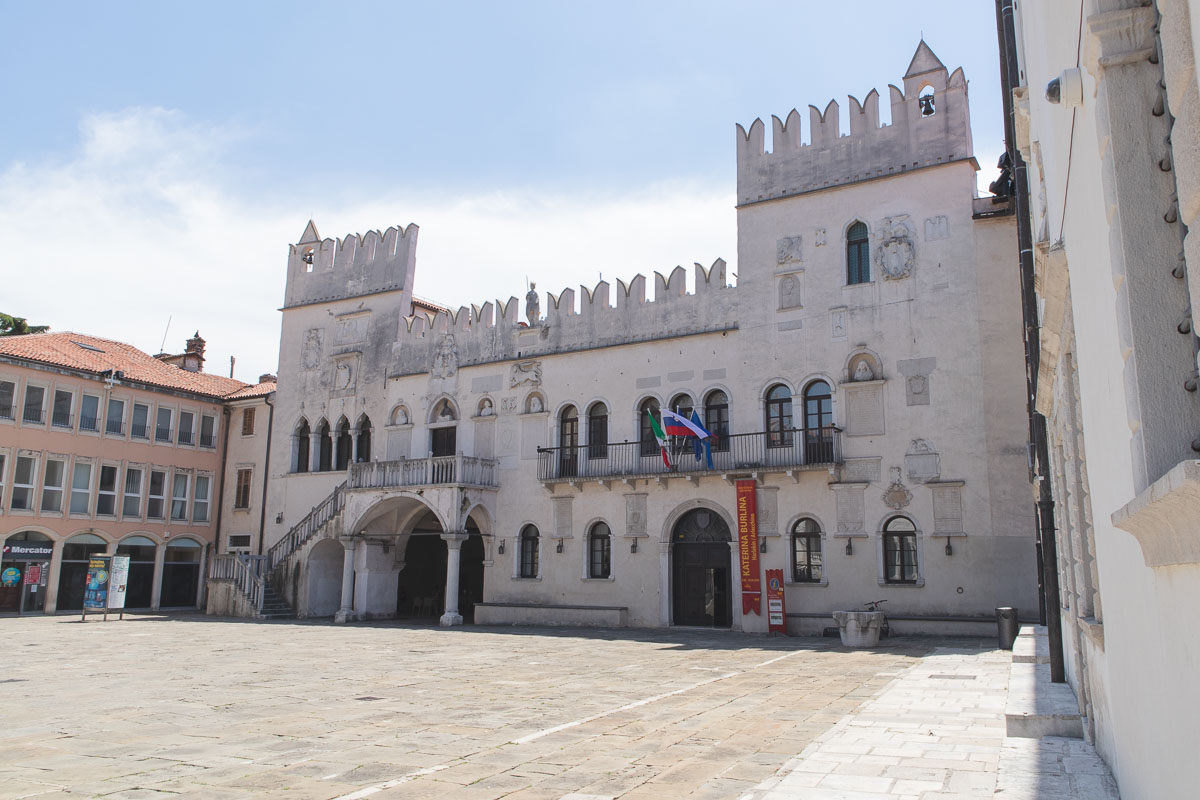 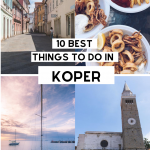 It is often forgotten that Slovenia has a coastline. Tucked between Italy and Croatia and part of the Istrian Peninsula is where you will find Koper, Izola, Piran, Portorož, and some smaller towns between. There are endless things to do in Koper and surrounding areas, perfect for a beach city break, day trip, and especially for food.

Koper (Capodistria) is the largest coastal city with a population of 25,000. It has a Medieval core that was once an island. Today it is an important port moving goods and people in and out of Slovenia. This region uses both Slovenian and Italian as their official languages so signs, menus, etc are presented in both.

DISCLAIMER: This post contains affiliate links which means I may receive a commission on purchases made through the links. This is at no additional cost to you and helps keep the site running.

Wandering the old town will only take a few hours so you can pair Koper with another nearby activity.

More things to do in Primorska

11 Amazing Things to Do in Western Slovenia

Read more about the Istrian Peninsula 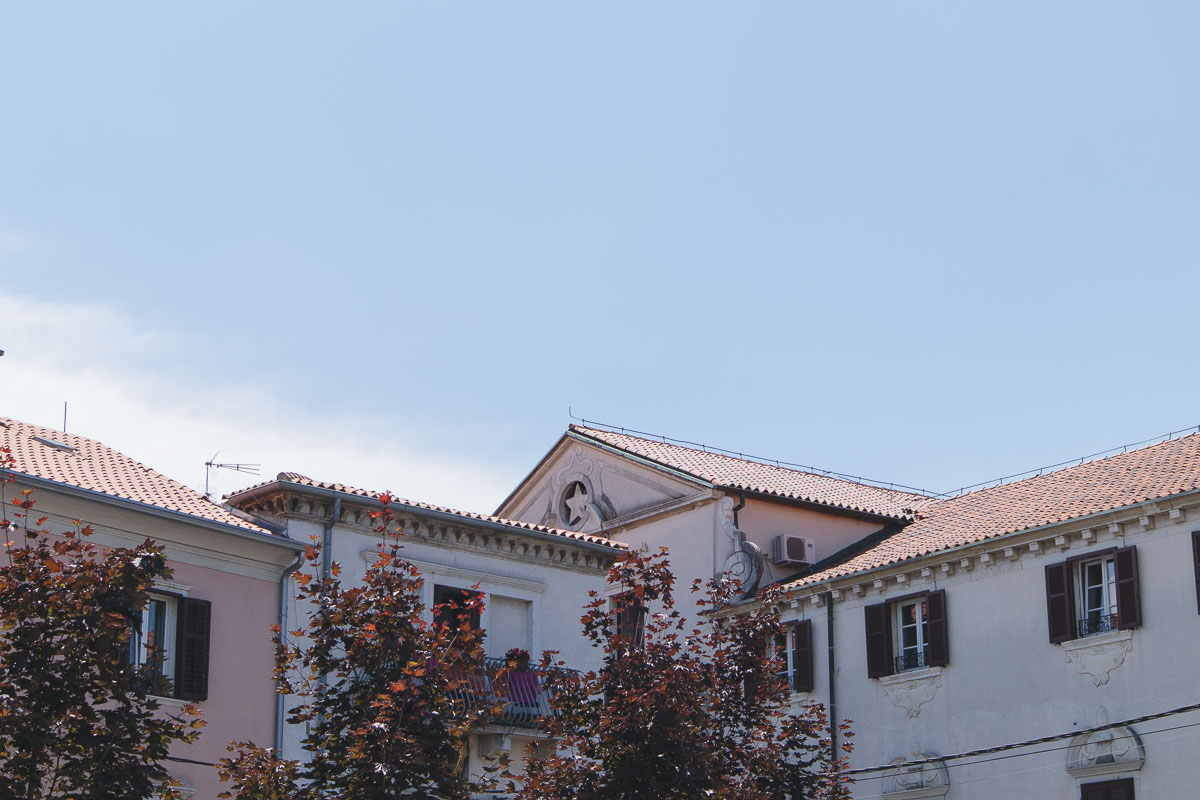 Settlements have been in present-day Koper since 3 BC when it was an island. Known as Aegida to ancient Greeks, Capris to the Romans, and Justinpolis to the Byzantines. It became the capital of Istria in the 13th century, hence the name Capodistria (capital of Istria in Italian).

The photo below shows the old coastline in red and the islands are outlined in blue.

Koper was part of the Venetian republic for centuries and this is reflected heavily in the architecture, as a Medieval Venetian style town. It was once a walled island with one bridge connecting it to the mainland.

Between the 1800s until WWII, Koper had a bit of a dark period. The city was changing ownership frequently, they stopped developing and maintaining it as before. The salt pans that existed between the island of Koper and the mainland were drained and Koper was no longer an island.

After WWII, Koper was part of the Free Trieste Territory with Trieste. This territory was split. Trieste became part of Italy and Koper went to Yugoslavia, present-day Slovenia. Most of the Italian-speaking population fled to Trieste. This decision is still contested today and can be a controversial topic if discussed with locals.

Things to Do in Koper

Walk through the Muda Gate

Muda Gate (Vrata muda) is the main gate to the city of Koper. In the past, there were once 12 gates but today only one remains. This gate is especially significant because Koper used to be an island and here is where the bridge was located. Built by the Venetians in 1516 along with a fortress that was destroyed in 1820 by the Austrian army.

Just through the Muda Gate is Prešernov trg. Here you can see a bronze statue of the town on the ground and Da Ponte Fountain (Da Pontejev vodnjak). The fountain once served as a subaquatic aqueduct to move potable water to the island of Koper in the 14th century. Modern archaeologists have excavated wooden underwater tubes that were originally used. The fountain has since been renovated. 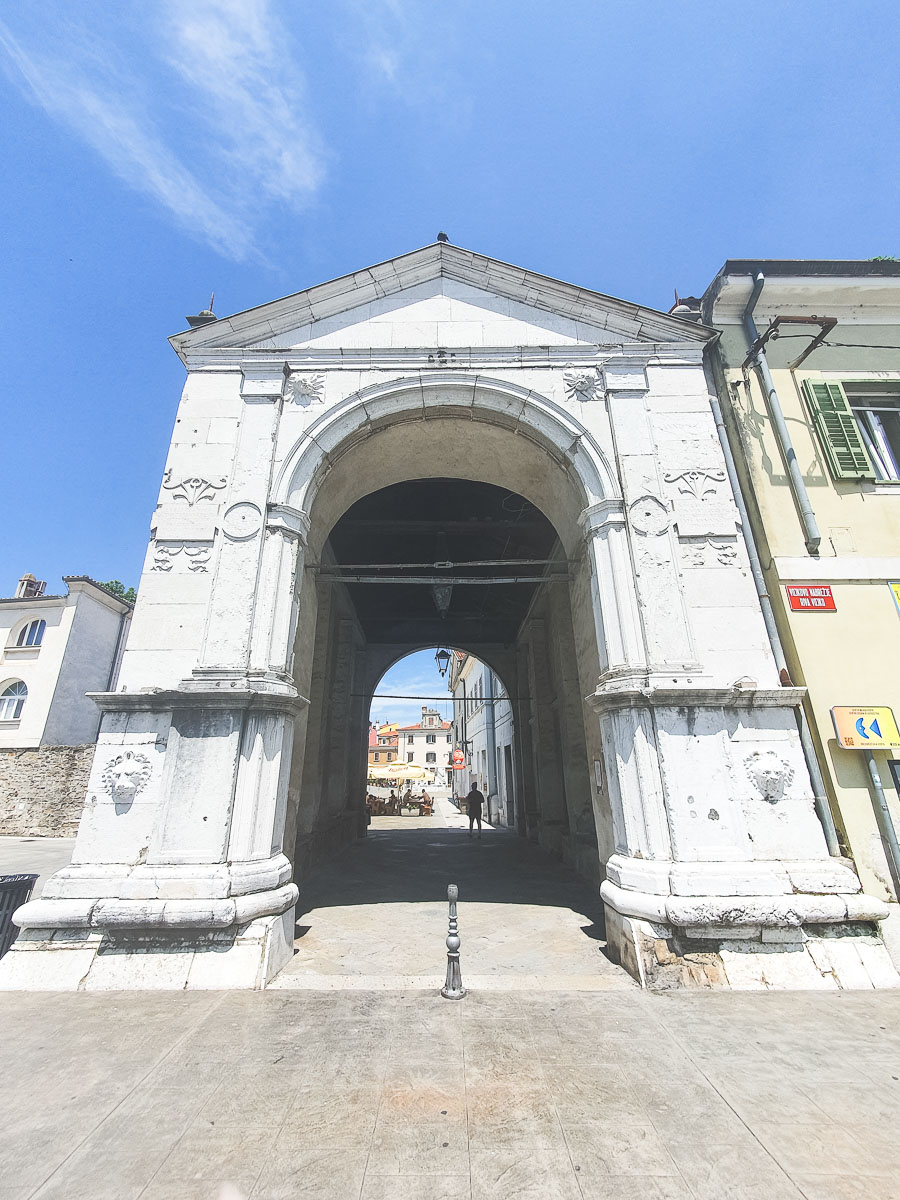 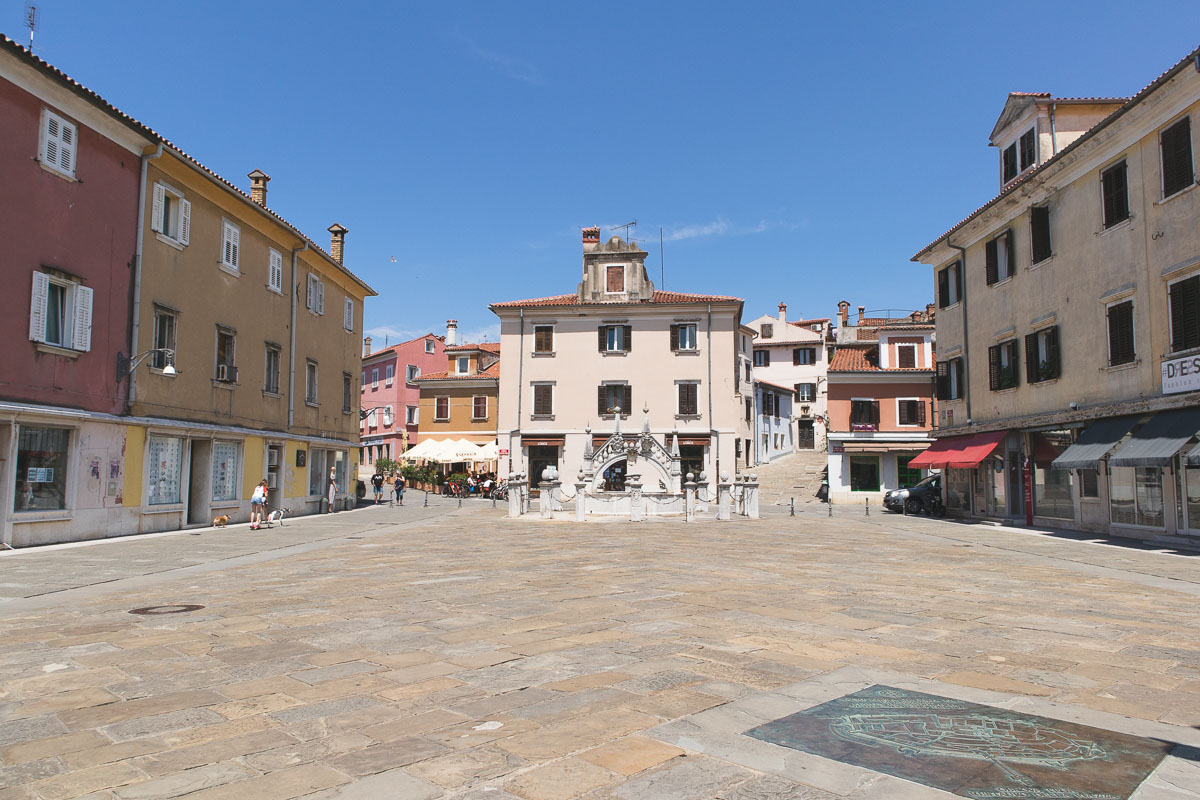 Play the Tale of the Mysterious Ship

Mini Adventures, a Slovenian-based company, created a fun scavenger-style game that can be played while sightseeing in Koper. You can read my full review and experiences with the game and order yours for your next visit! 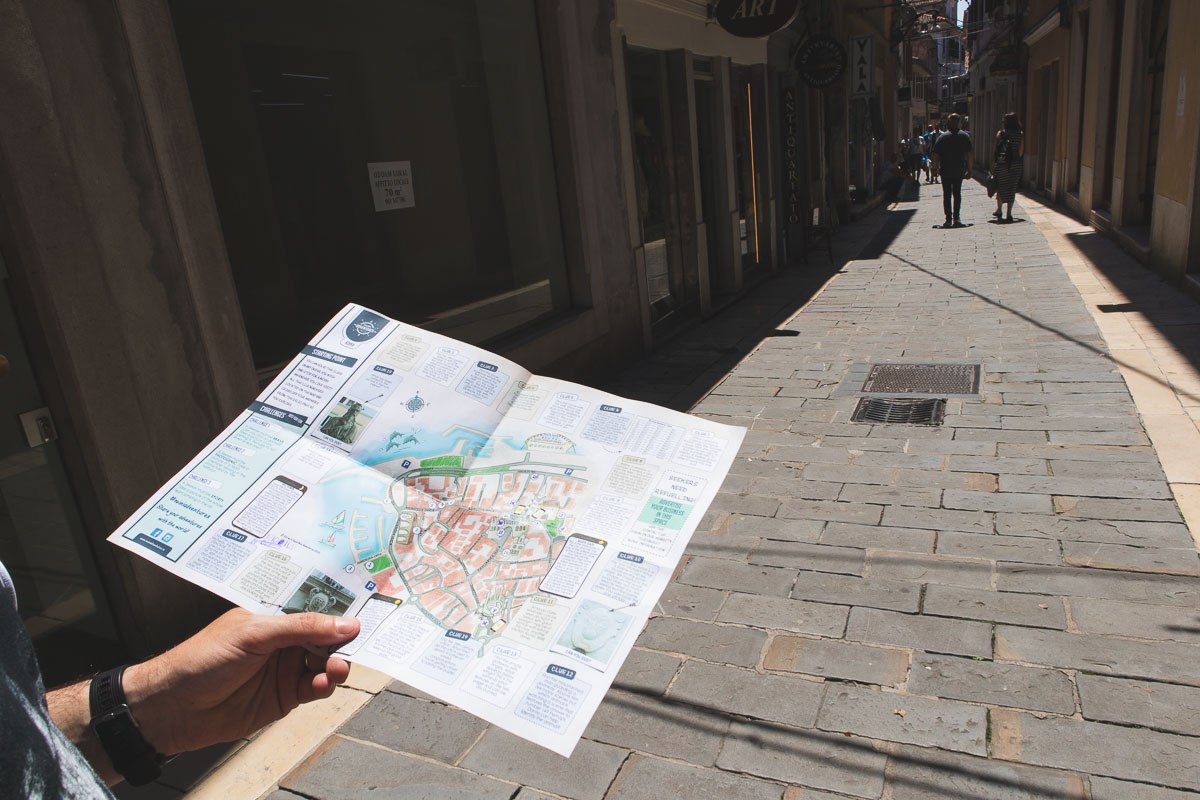 Tito Square (Titov Trg)  is probably the highlight of Koper. What was once the center of the city, when it was an island, is surrounded by truly stunning architecture. Venetian-influenced with touches of Renaissance, Gothic, and Baroque features. Lining the square you will find five major points of sightseeing.

Cathedral of the Assumption

The Cathedral of the Assumption (Stolnica Marijinega Vnebovzetja) an 18th-century church with a Gothic exterior and contrasting Baroque and Rococo decor inside. Next to the cathedral is the Bell Tower (Mestni stolp), and you can climb the 204 stairs for a beautiful view of Koper. Hours typically run mornings and afternoons. Tickets are 3 Euros for adults 2 Euros for children. The tower is said to have one of the oldest bells in Slovenia (1333). 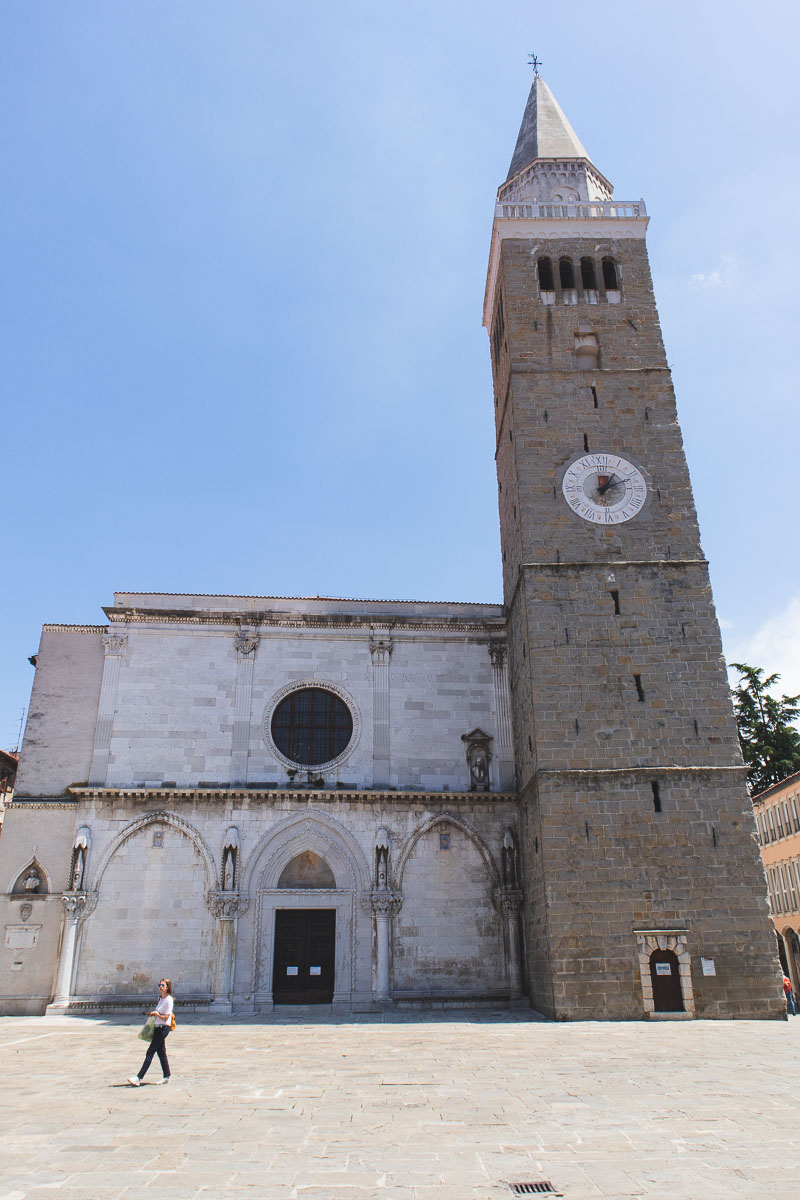 A 15th-century Venetian Gothic palace dominates Titos Square called Praetorian Palace (Pretorska plača). It was once the home of Koper’s mayor, appointed by the doge in Venice. Today it serves as the city hall, tourist information center, and a reconstructed pharmacy. 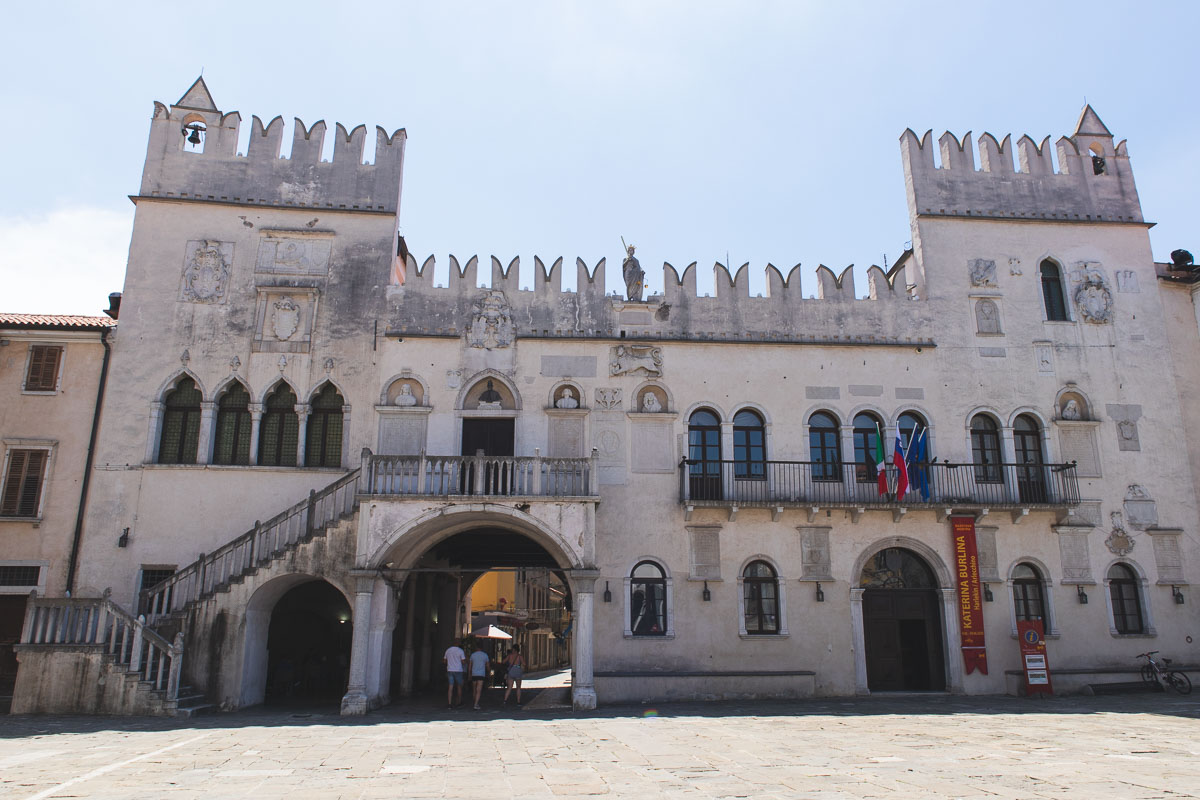 Loggia Palace (Loža) Venetian Gothic palace, which appears to be inspired by the Doges Palace exterior in Venice, was built in 1462. Additions were completed in the 16th and 17th centuries to add a second floor and embellishments on the facade. A once-popular place for artists now houses a cafe on the ground floor and art gallery on the second. 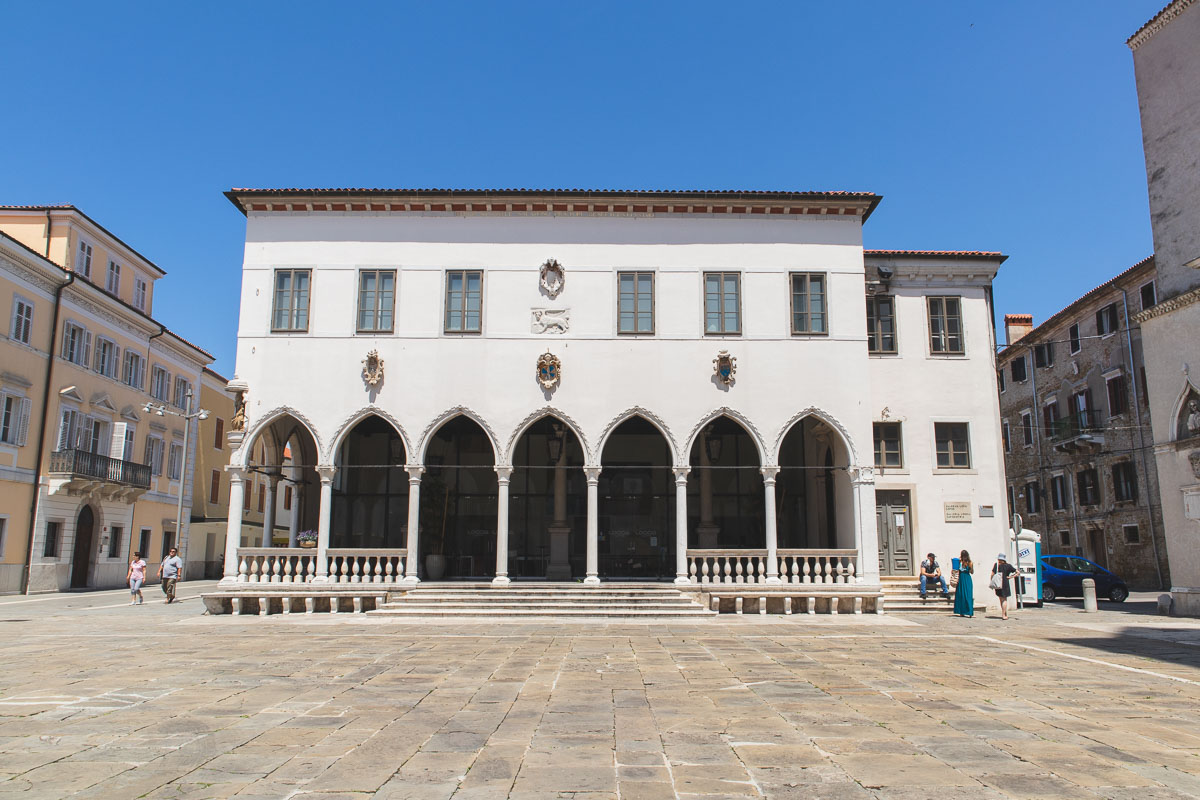 The Armory served as weapons storage until 1550 and the Foresteria Palace accommodated guests of the Podestà of Koper (high ranking officials of Italian cities in the Middle Ages). They were connected in the 18th century and now serve as the Rector’s office of the University of Primorska and the library of the Faculty of Humanities.

Take a Dip at the Beach

Between the pier and marina is a pebble and grass beach open daily from 8 am until 8 pm from May until September. It has toilets, showers, and a bar. 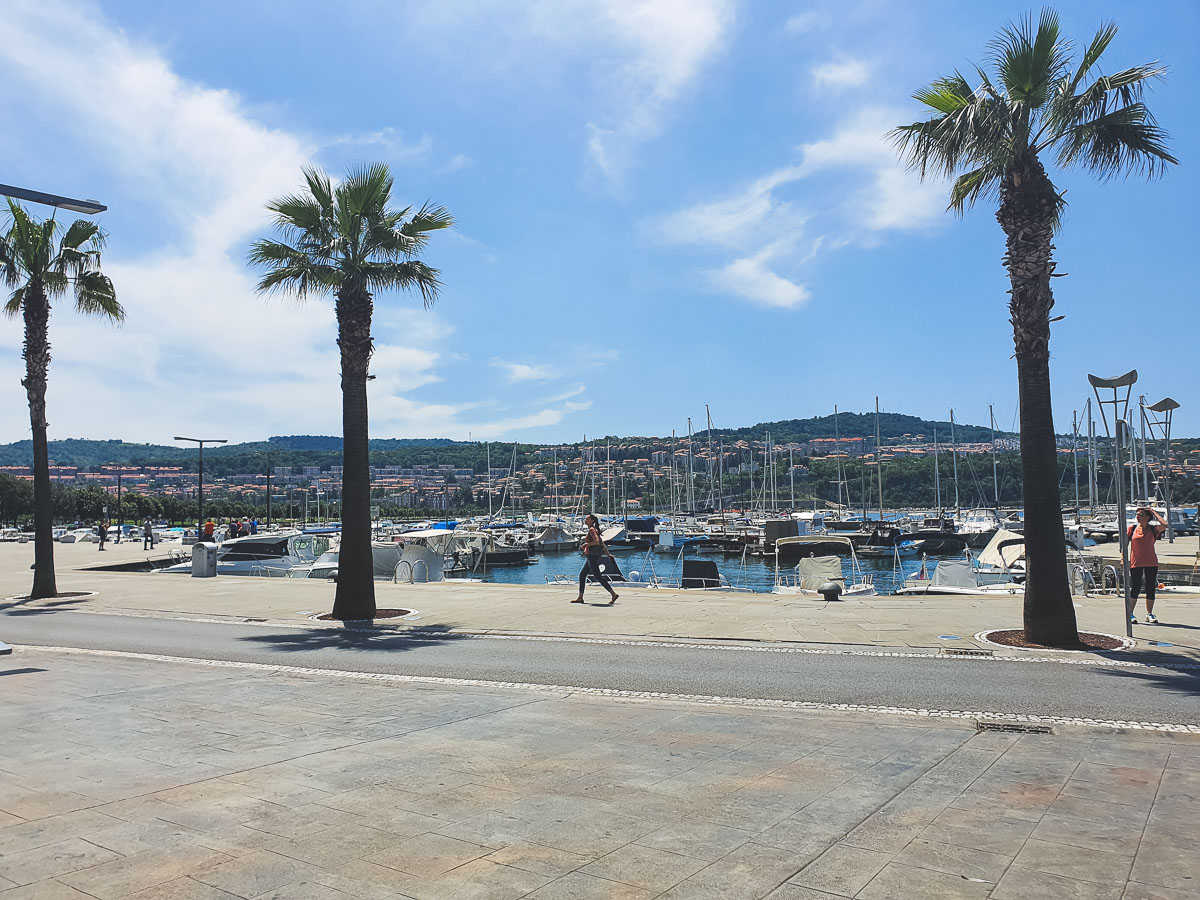 Kidričeva ulica is where you will find a few 16th-century churches, 18th-century Totto Palace, and Venetian style houses. The houses, while overdue for renovations have colorful motifs and protruding second floors being held up by wooden pillars. 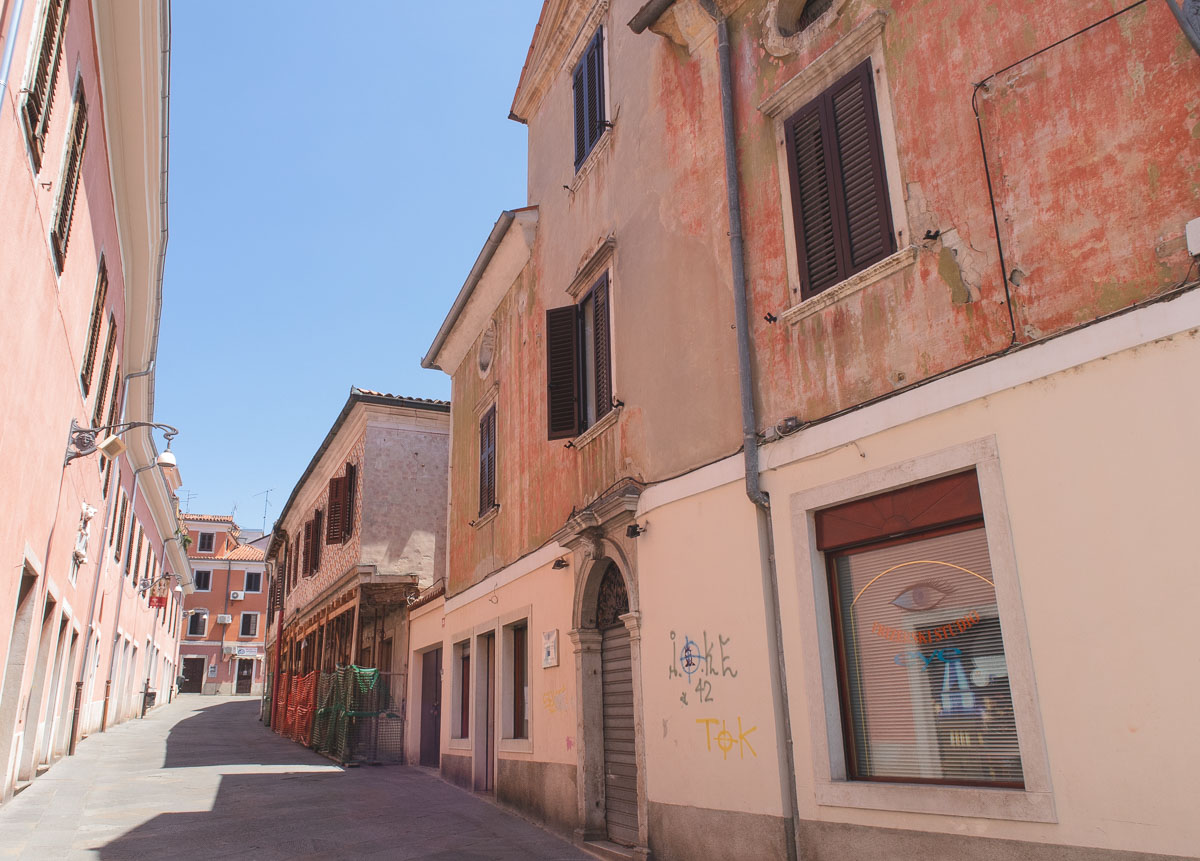 Čevljarska ulica translates to Shoemaker Street alluding to the profession practiced on this very street for centuries. Today is a beautiful narrow street with a collection of features of Koper’s past. Walking down it feels like being transported to the past. 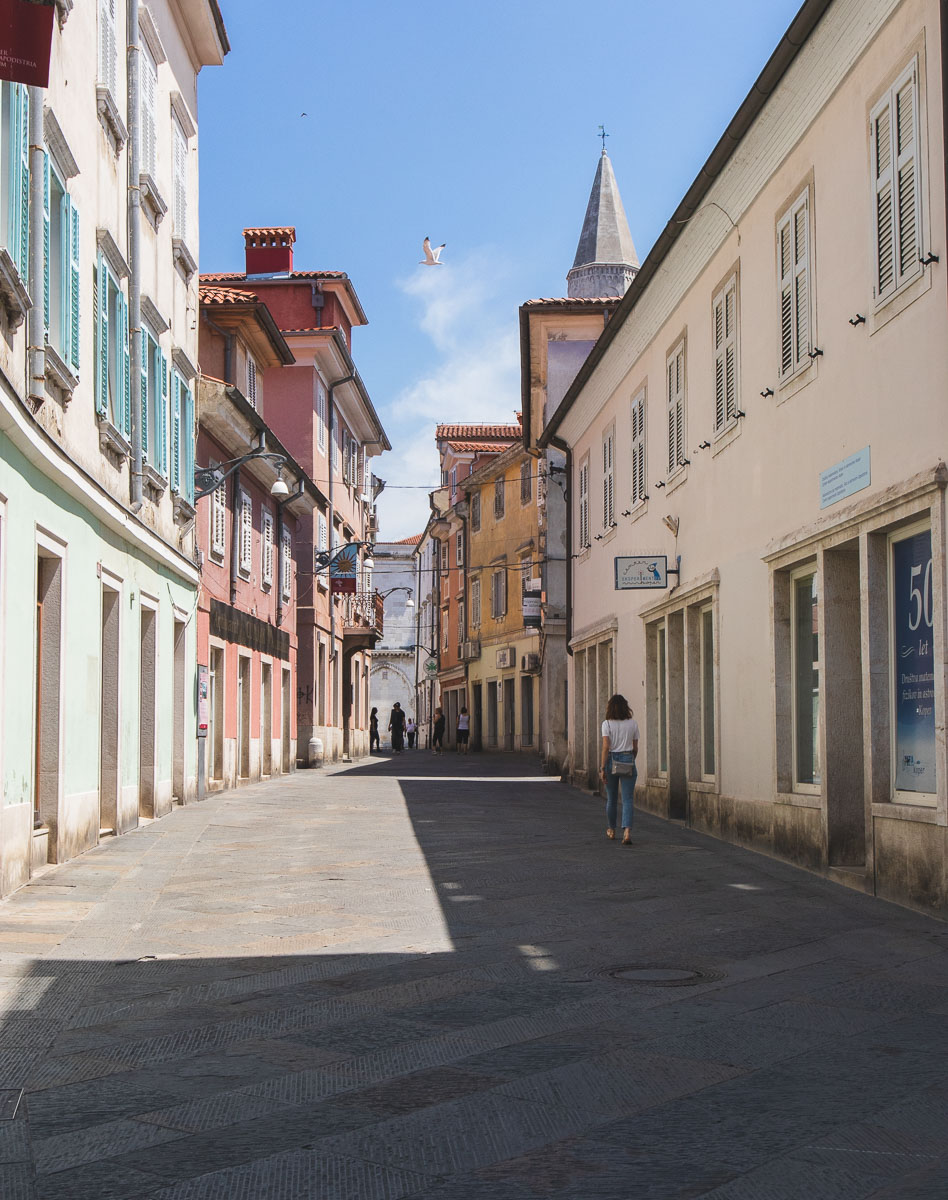 Just before the marina is Carpacciov Trg. It was named for Vittore Carpaccio, a Venetian painter. One side of it is brightly colored buildings and the Carpaccio House. The opposite side is the Taverna, an old salt storehouse for the Venetians. Today it is an event space although when I visited there were kids enjoying the space for their scooters because of the shade. An interesting thing I learned while researching Koper is that the fountain in Carpacciov trg was brought from Venice. It was made in the mid-15th century but wasn’t moved to Koper until 1935. 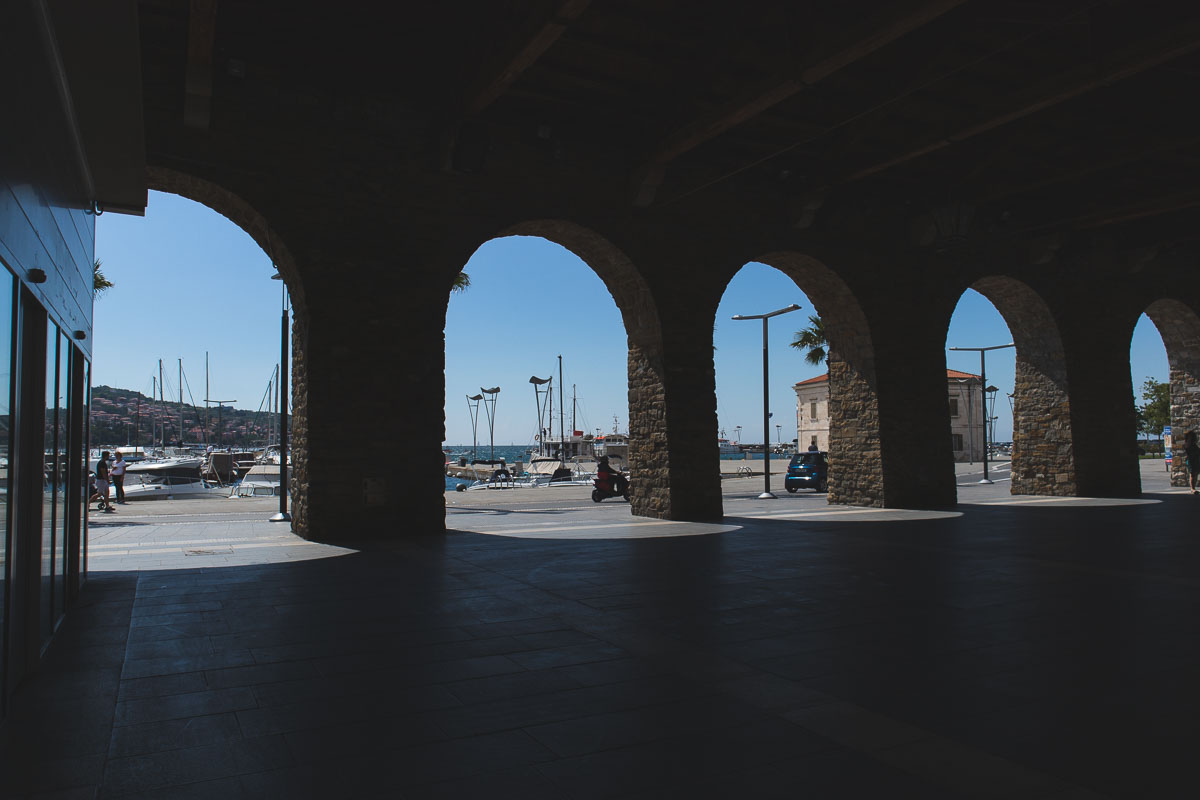 Take a Panoramic Bike Tour Along the Parenzana

The Parenzana (Porečanka) is a now-defunct railway that ran from Trieste, Italy to Poreč, Croatia. You can take a four-hour bike tour that begins in Koper and will take you to Piran, Strunjan Salt fields, and Portorož. Check availability here.

How to get to Koper

By car: From Ljubljana, the drive is around one hour and 15 minutes. Parking is available around the edges of the old center but no driving is allowed inside. Find parking lots here.

Arriva runs routes from Ljubljana to Koper Tržnica (the market) and it takes 1.5 hours. Check timetables and ticket prices here.

Arriva also runs routes between Ankaran, Izola, Strunjan, Portorož, and Piran. The Slovenian coast is only 46.6km long so you could wander the whole riviera in a few days.

By train: From Ljubljana, there are several trains a day to Koper. The route is between 2 and 2.5 hours long. Check here for the timetable and prices. 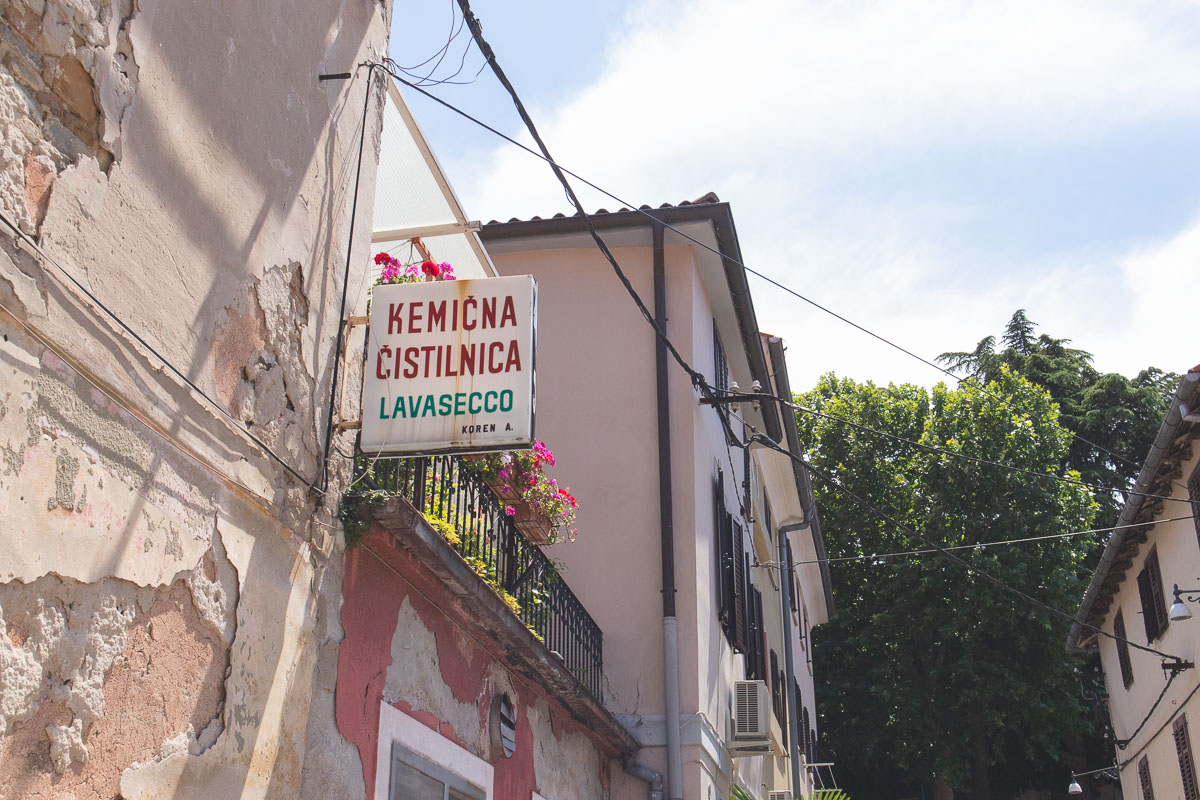 Where to Stay in Koper

Historical | B&B Veneziana Suites & Spa is set in a historical building from the 14th century. It is perfectly located in the center of Koper and has all of the amenities you would need in addition to spa treatments. Read Reviews | Book Now

Affordable | Secret Garden is a hostel found in the old town of Koper. Less than 1 kilometer from the beach. They have mixed dorm rooms with a shared bathroom starting around €16 a night. Read Reviews | Book Now

Local | Houses of Slovenia Istria is located a 30-minute drive inland in a small town called Truške. They have a few options for accommodation but they are known for their tiny houses. The houses are without water, electricity, or bathroom (it is just outside), but they are on a beautiful farm that makes olive oil, wine, and more. Read Reviews | Book Now

If you are choosing to use Koper as your base there are some amazing day trips. The advantage of its location makes it a great place to explore not only Slovenia but also Italy and Croatia.

Piran – One of my personal favorites in Slovenia is Piran. Known for its beautiful Venetian architecture, famed Tartini Square, and old city walls.

Trieste – Wanting a bit of an Italian holiday? Then head over to Trieste to explore this beautiful city along with my personal favorite, Miramare Castle.

Western Slovenia – 11 amazing activities that you can experience while in Primorska such as wine tasting, adventure sports, incredible hikes, and unbelievable food.

Istrian Food Tour – An all-day Istrian food tour that starts in Koper and heads right into Croatia to stop in Hum, Motovun, and Groznjan. Note that if you do this tour that you have your documents and check visa requirements. Croatia is outside of the Schengen Zone.

Postonja Cave and Predjama Castle – This day trip will take you from Koper to visit the famous Postonja Cave where currently they have baby olms on display. The second part of the trip is to Predjama Castle, a famous castle built into the front of a cave. 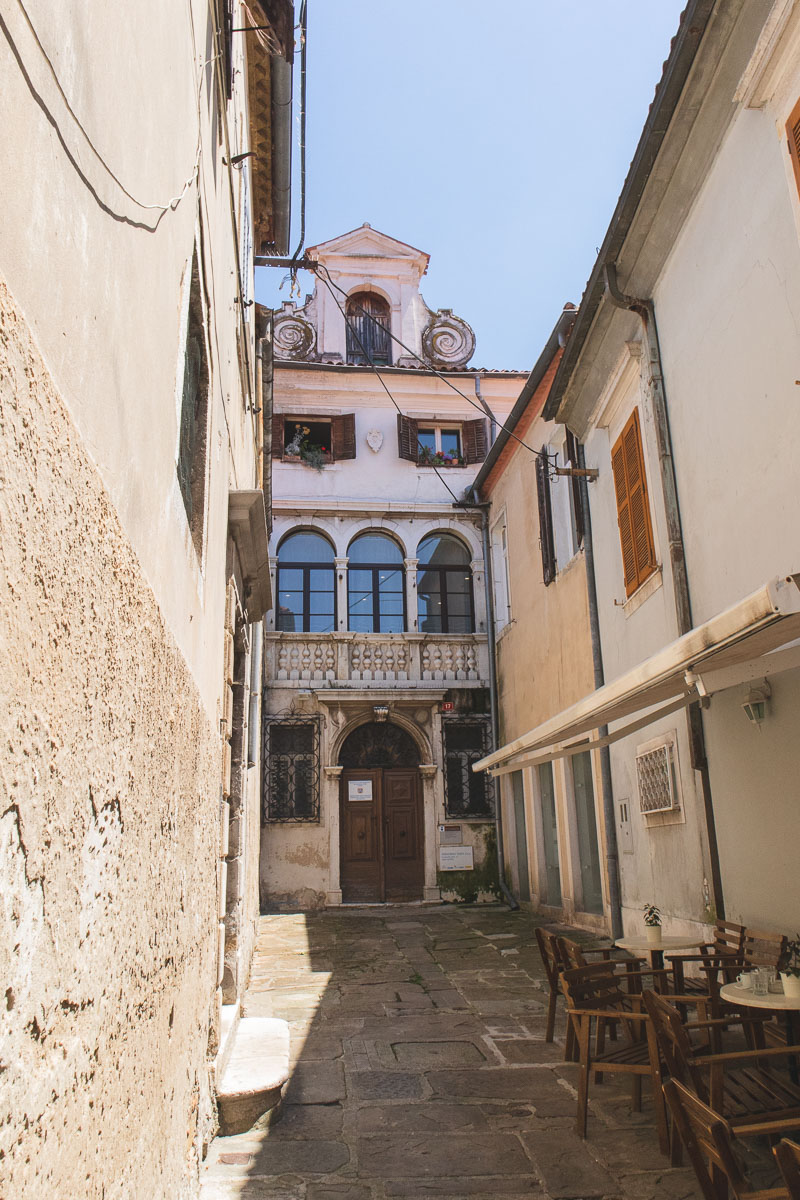 Save this article for later 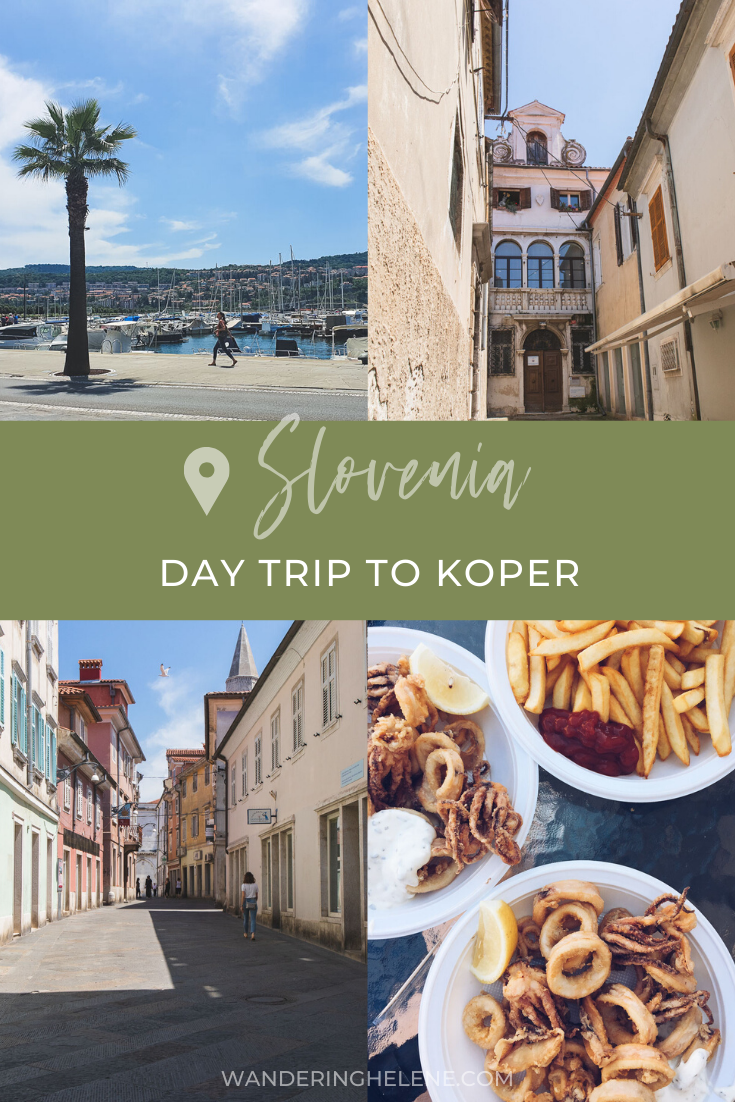 Thank you for taking the time to read this guide of things to do in Koper. If you will need any assistance booking any activities listed here please feel free to reach out. 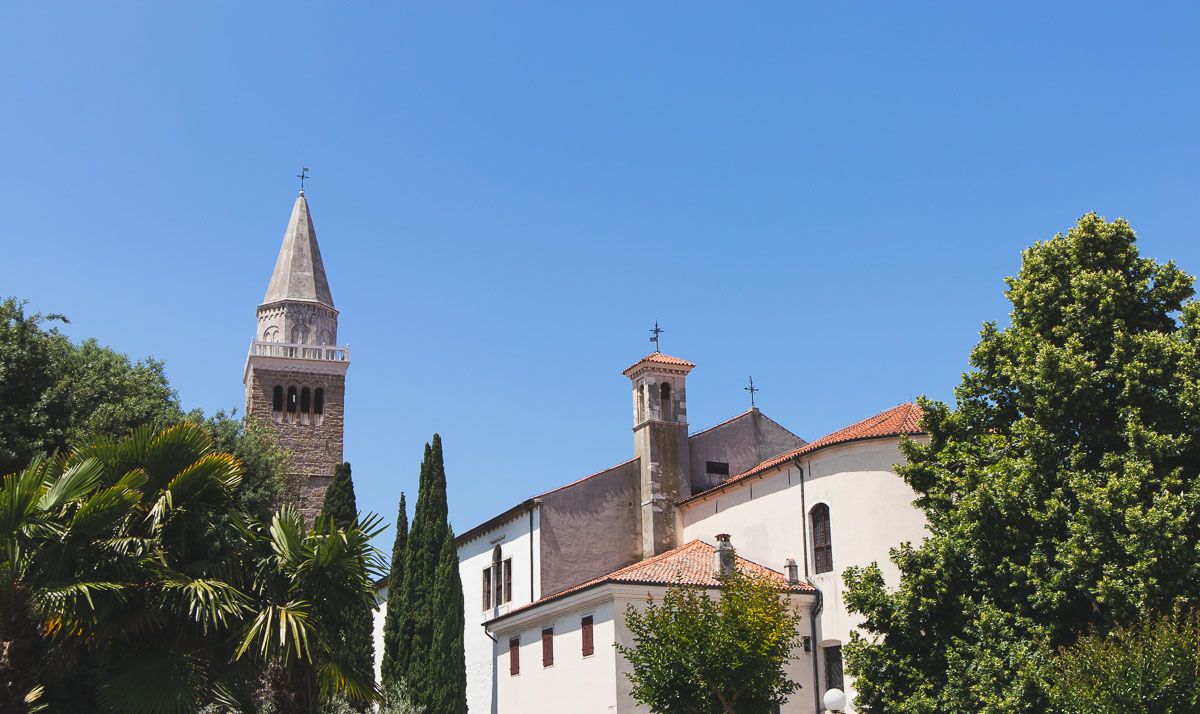