There are a handful of places that I have wandered that have left me speechless. It feels as though they have taken a part of my heart and I return to them whenever I can. These places never seem to lose their magic. The Seven Sisters hike and Beachy Head is one of those places. I can almost feel being there when I close my eyes.

The Seven Sisters hike with Beachy Head is a once in a lifetime experience and easily reached from Brighton or London which makes it a perfect day trip when visiting.

About the Seven Sisters Cliffs

Seven Sisters can be found in the Seven Sisters Country Park (Exceat, BN25 4AD) that is part of the South Downs National Park. They are a series of 7 chalk cliffs. Each of the cliffs has a name (Haven Brow, Short Brow, Rough Brow, Brass Point, Flat Hill, Bailey’s Hill, and Went Hill).

Birling Gap is a break between the Seven Sisters and Beachy Head cliffs. Here you can find a pebble beach with incredible views of the cliffs. While there is plenty of parking and convenient bus stops at Birling Gap, the beach is only accessible via stairs. There are also refreshments available at this location.

Beachy Head is the highest chalk sea cliff in England at 162 meters (531 ft). Formed over 66 million years ago and were exposed during the Ice Age when the English Channel and coastline were formed. This cliff, along with the Seven Sisters, is being slowly eroded away by the English Channel.

The Seven Sisters hikes start near Seaford at Exceat. There are bus stops and parking lots (car parks) just after the Cuckmere Inn as I noted on the map at the end of this article. Here you will find all of the parking lots, bus stops, and some starting points for the hikes.

WANDERING WARNING: Seven Sisters is a very delicate landscape that is constantly being eroded away. Please do not sit or stand on the edge of the cliffs. They can, and have, broken off. Respect nature and avoid picking flowers or removing pieces of the cliff. 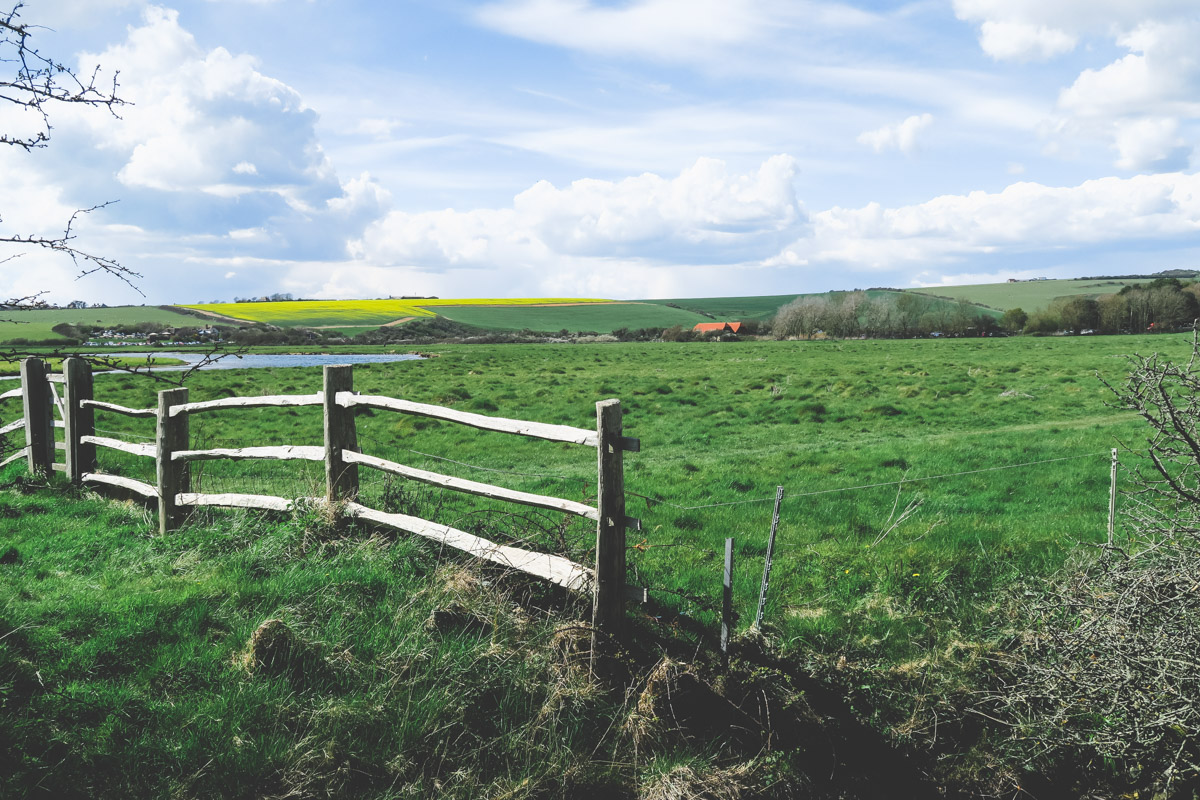 There are a few paths you can take, the first is to Seaford Head with a famous photo spot to capture all Seven Sisters. This path will take you about 1 hour and 30 minutes and is a circular path. It isn’t a difficult path but it can be muddy so wear appropriate shoes. (See the path)

You also have the ability to just visit the beach at the start of the Seven Sisters cliffs. As many times as I visited this beach I never saw anyone swimming. The water is very cold, the wind can be brutal, and the weather doesn’t typically get incredibly hot in England.

There is a circular path that takes you across the cliffs to Birling Gap. From there you go inland to the Friston Forest and back to where you began (see map) This walk is just under 13km (8 miles) in length and takes about 6 hours. The cliffs can be incredibly steep and challenging depending on the weather. Be very mindful to wear proper footwear and stay away from the edge of the cliffs.

Once you get onto the cliffs then you can continue along the coast past Birling Gap until you reach Beachy Head. This is my favorite path as you gradually work your way up to the highest point where you can be rewarded with a nice meal and pint at the Beachy Head pub.

Use this map if you are doing the circular route.

This route is about 10.4km (6.4 miles) and has a lot of inclines and declines as you go up and down each cliff.

If you take this route and want to take the bus back check that the 13X is running. You can catch it at Beachy Head. Otherwise, you will need to continue to Eastbourne to catch a bus or train which is another 5 km.

Start at Birling Gap and head east towards Beachy Head. Then head inland towards Eastbourne and then back towards East Dean and finish at Birling Gap. See the route here. This hike is about 8.1 km (5 miles) and takes approximately 3.5 hours.

Searching for fossils and sea-glass at Seven Sisters

As if the views and the various routes between Seven Sisters and Beachy Head were not enough you can also go fossil hunting or search for sea-glass. Sea-glass can be found along the beaches here and also in Brighton. This is because of the rocky beach, pieces of glass get trapped and slowly erode away until they form these colorful pebbles of glass. I have found a few pieces here so it is possible but probably advisable to go very early.

Some parts of Seven Sisters and Beachy Head are over 100 million years ago. Because of this, you can sometimes find fossils in the area. Please note, do NOT damage the cliffs, do not dig into them, or chip them away. The chalk can be very soft and this can cause significant damage that cannot be repaired. It can also be incredibly dangerous. I suggest doing your research before you begin your fossil hunting.

How to get to Seven Sisters

Trains run from London to Brighton, Seaford, and Eastbourne. Be mindful there can be changes at Lewes. Check schedule.

The number 12, 12A, 12X buses run from Brighton to Seaford through to Eastbourne. It runs several times an hour Monday to Saturday with limited service on Sunday. Check schedule.

The number 13X bus runs a limited schedule on a similar route but with a detour via Birling Gap and Beachy Head.

Where to visit after Seven Sisters?

Brighton – A seaside resort town south of London with a fascinating palace, a fun pier to spend the afternoon, and more independent shops and restaurants than you can ever see in a day.

Bodiam Castle – Castle enthusiasts do not want to miss this one! A 14th-century moated castle that you can visit in Bodiam.

Thank you for taking the time to read this post and if you have been to Seven Sisters or Beachy Head let me know in the comments what you thought! -Helene

8 thoughts on “The Seven Sisters Hike to Beachy Head”