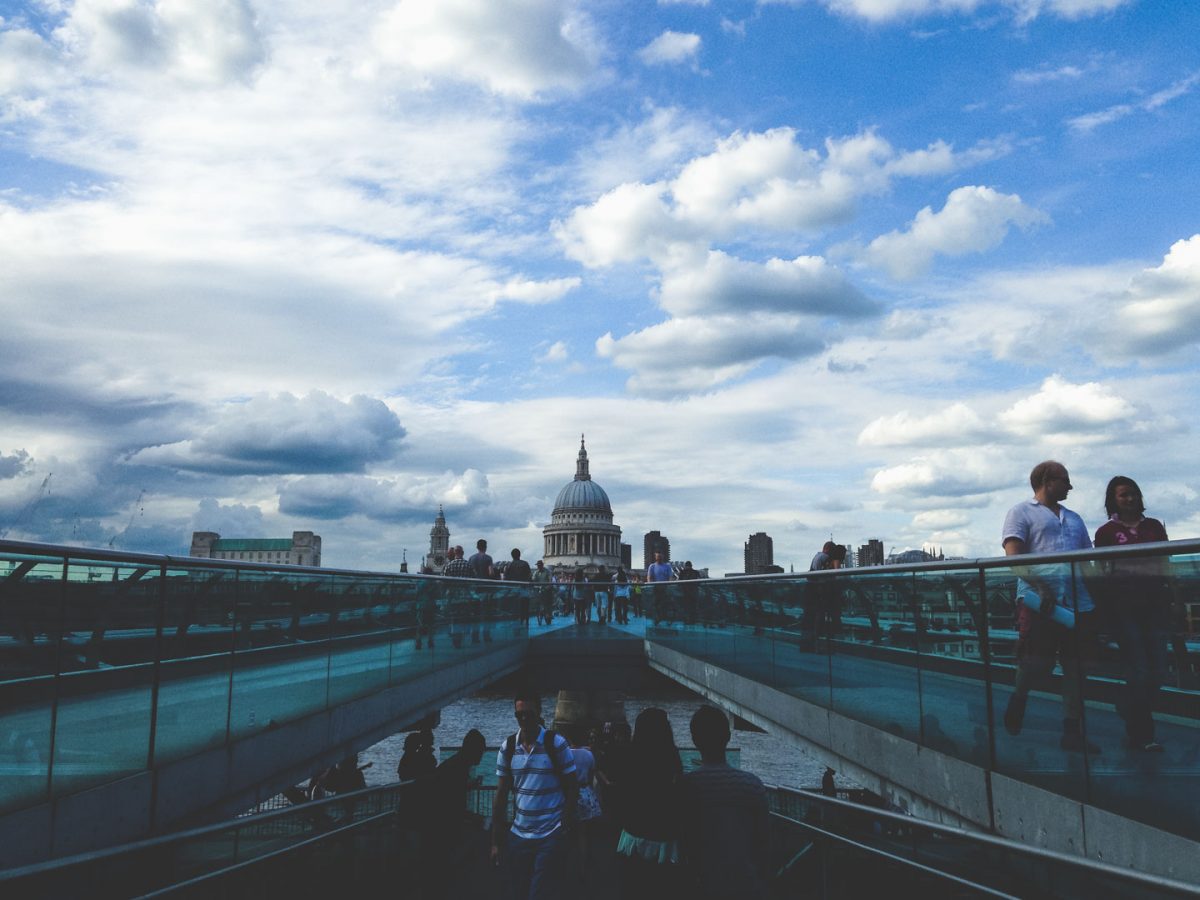 This has not been an easy post to write, but I think it is important to share stories. So many times I go back and forth thinking that my story isn’t worth telling because I still have so many opportunities given to me based on where I was born and what I look like, but part of me thinks that is why I should, so others can see just how complicated crossing borders can be. I started a blog not long after I moved away from London, but I never made a London post. There are various reasons for this, but first, let’s start at the beginning.

I remember the day I moved to London. It felt like a small town girl had finally made it to the big city. I flew in from Rome and took a bus from the airport. It felt like I was driving through the middle of nowhere for ages and suddenly I was in the middle of London. I remember standing outside Liverpool Station with my luggage, it was January and cold and raining but it didn’t bother me. My eyes were open wide as I looked at all of the tall buildings, the old buildings, the iconic double-decker buses, and the black cabs. It was just like the movies. I couldn’t believe that I was really in London and it was my new home.

In 6 months of living there, I lived in 4 different places. All of them busy houses full of other immigrants just trying to make it in life. The rent was very high, in one house we had at least 14 people living there, and many of the landlords were scammers. For example, some houses the electricity is prepaid and you use a key to top up your account at the store. In this house of 14 or so people, we ran out of money on our key but it was locked in a closet only the landlords could access. They refused to come to our house to put our electricity back on for days. There was absolutely nothing we could do.

Some of us were in the early stages of our London experience, still hopeful, still excited about the possibilities, and the others already jaded from realizing the truth about London. They were too overworked just trying to afford rent, transportation, and food. Unfortunately, it took me just a few months to realize this truth. It doesn’t matter your capabilities or willingness to work hard – you are just an immigrant. You will never be one of them.

This was soul crushing. I was dreaming of this moment, of having a big city life, working an awesome job, and then application after application – even for internships and volunteering were continuously denied merely on the basis of being a foreigner. I just finished a Master’s degree in the US, I helped start a non-profit, I spent the previous year living in two different countries learning their languages. In my mind, I had a pretty decent resume, but to them, I was a liability.

This was a story I heard over and over again throughout my stay in London and England. I met taxi drivers, baristas, servers, you name it, telling me that they had advanced degrees from their home countries. They were doctors, researchers, surgeons, scientists, even far more advanced than myself with a lot of work experience. They spoke English perfectly. Every time I heard these stories it felt like being stabbed in the heart. If myself as a white, native-English speaker from the US cannot even get an interview, or when I do, I am told that I am not qualified to be a receptionist, how will someone of color from a non-western country with English as their second language, manage? They probably won’t.

They continued to tell me stories of their cousins or uncles who moved to the US and how they started businesses, bought a home, one proclaimed that his cousin even had a swimming pool, as if this was the prize at the end of the tunnel. I saw it in their faces that they knew they were capable of the same, but because of their geographical position, it wasn’t even within their reach. I’m not trying to sell an American dream here, but there is a very clear difference in social mobility between the US and Europe. Some immigrants in Europe aren’t even given the chance even when fully qualified.

London is a tough city for an immigrant, which is shocking to hear because if you visit there you will probably only see foreigners serving your coffee or as your cashier. These are the spaces we are allowed in. Nothing too meaningful or important, or that pays a living wage. No, those jobs are reserved for the locals.

This story is relevant in a lot of places, but for some reason, I hear it again and again about England. I guess you can say I had my heart broken a bit by London. I don’t feel like I failed or that I gave up, I just pivoted to another path. I’m not bitter about it, but that was a very challenging 6 months of living in a city with 8+ million people.

While I managed to document some of my stay there I don’t feel like I have anything of substance to offer in terms of travel tips – so this is why I am offering my story of the difficulties of being an immigrant, of chasing that dream of living abroad. Living abroad is not all about documenting the cute coffee shops or bragging about work views. I can’t recommend the best restaurants in London or tips for sightseeing. I spent those six months trying not to drown in the crowd. It hasn’t been an easy path by any means. I’m afraid I show too many highlights of life abroad when there have definitely been some dark days, weeks, and months. This life is certainly not for just anyone.

READ
How to Travel More Sustainably in 2020

It isn’t easy moving to an entirely new place especially if you are in a different country, an ocean away from your family and everyone you know. Living in another country is learning how to live all over again. You need to learn the language, the rules, the unspoken social rules – which are just impossible to navigate – the traditions and culture, every little thing. You have to deal with intense paperwork that is scrutinizing every little detail about yourself. I have even been detained and heavily questions and scrutinized at the border just for being an immigrant. Even if you did nothing wrong you just feel like a criminal.

You don’t know anyone. You don’t understand how to utilize the post office or find a doctor, you might not even understand the measurement system at the grocery store or for the weather. Every little thing is different. People who have never lived in another country don’t have the opportunity to appreciate this part of being an immigrant. They don’t see all of the extra effort we are putting in while quietly navigating and negotiating to blend in.

I remember when I lived in Mexico, my internet wasn’t working, and they kept saying they would come around to fix it, but if you know Mexico then you know you can wait for weeks. I didn’t have that kind of time so I wrote down a bunch of sentences I needed and went to the provider, waited my turn, sat down to talk to someone, and started reading from my paper. I had a big dictionary next to me and used it to function through the whole conversation. When I first went abroad smartphones were not as abundant as they are now. I had to make do with what I had. I didn’t have Google Translate at my fingertips. Something as simple as getting my internet back was a huge challenge and took me hours of work.

Recently, I failed my driving exam in Slovenia. I have been driving for 17 years. Why did I fail it? Well, I failed to do something that is a rule here that no one – including my driving teacher – ever said to me. He assumed it was a rule back in the US so I would know it. He and the man giving my test couldn’t comprehend why I didn’t understand something so simple to them. I’m not from Slovenia. I’m not even from Europe. I can’t possibly know everything.

As an immigrant, I was faced with discrimination in housing and the job market. I had to deal with intense paperwork for immigration and when I had one error I was swiftly sent a letter telling me I will be deported unless I appealed. Fortunately, it was a small mistake on my part so I could resubmit the correct papers, but of course, there were more fees to pay with each submission. Once, I had to pay six months of rent up front because I was a foreigner who worked as a freelancer. This was also on top of a deposit, and what I felt was a very unreasonable request.

The point of this post is to show a few things, first, that not everything works out and that’s okay. Really, I still enjoy London and love to visit there, but at the same time, not everything is what it seems. I think it is important to share these stories as well. I don’t want young people to read this blog and think everything about living abroad or traveling is perfect, safe, and easy. The reality is that living abroad is sometimes like doing life on hard mode.

Secondly, with a lot of talks around immigration happening across the world I wanted to open up the discussion on how these policies affect human lives. As an anthropologist, I think that viewing the numbers are fascinating and useful, but it is the personal stories that provide the crucial context and understanding. I have this naive hope that someone reading this might realize being an immigrant is very difficult and maybe open themselves up to being more compassionate towards us. We are trying to not only learn how to live in a new culture but also how to navigate vague and always-changing immigration policies and being faced with discrimination. I know how fortunate I am in the whole scheme of things. I am so grateful every single day. But because of this, I know also how difficult it is for others and those stories are also ones you should hear.

Thank you for taking the time to read this post and if you are interested in reading more personal essays about travel, living abroad, or culture let me know in the comments. Don’t forget to follow me on Instagram for daily updates!

Hi! I'm Helene, an American living in Slovenia documenting the world around me. I love old places, castles, food markets, and coffee.

3 Castles You Can Easily Drive to from Ljubljana

Learning How to Make Potica and other Slovenian Easter Traditions