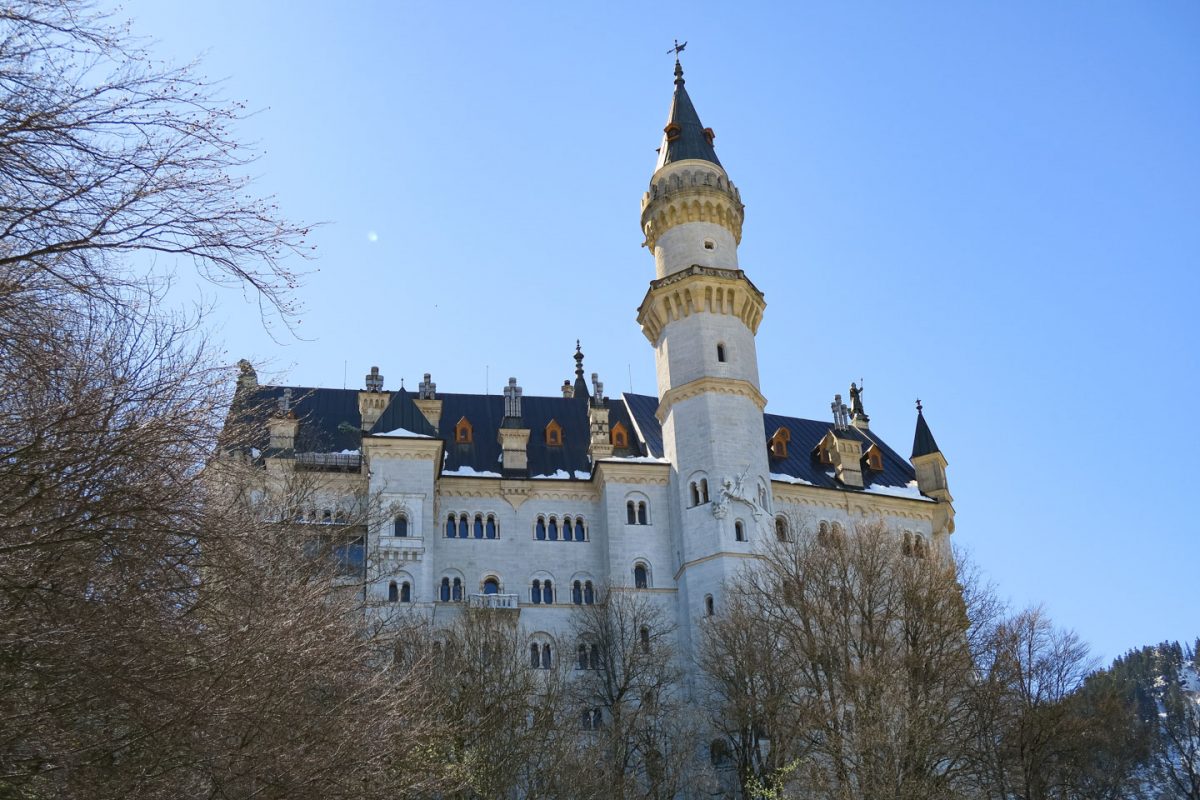 Visiting Neuschwanstein Castle is definitely marking one off of the castle bucket list. This has been a dream of mine for as long as I can remember. The bonus of visiting this absolutely stunning castle is that there is another one within view, Hohenschwangau Castle that is also impressive in its own way.

Visiting these castles is not like most places I have visited so I wanted to offer the most comprehensive guide I could so that you will get the most out of your time. Neuschwanstein is a bit isolated so there is a bit more attention and planning needed.

Neuschwanstein Castle is also commonly referred to as the Disney castle because the iconic Cinderella Castle was inspired by it. Yes, you are understanding that correctly, we say it backward, but Neuschwanstein doesn’t roll off everyone’s tongue as nicely. 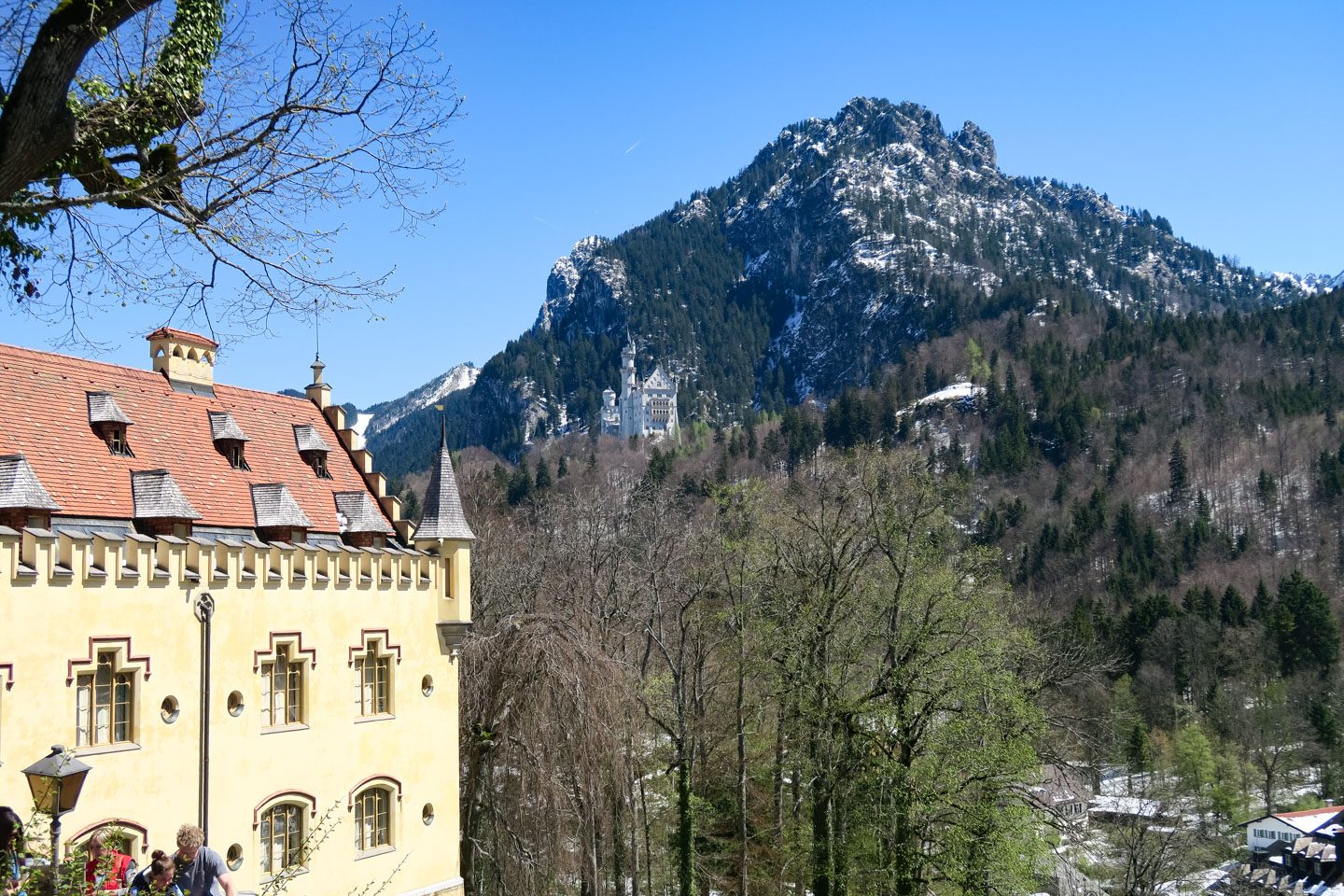 How to pronounce Neuschwanstein

Let’s break it down. Neuschwanstein is made up of three parts. ‘Neu’, which means new. Pronounce this to rhyme with boy. ‘Schwan’ is German for swan. This part is pronounced like swan but aim for ‘shvan’. The last section is ‘stein’, the german word for stone, and it rhymes with mine [noy-shvan-stein]. So now not only do you know that this cleverly named castle is New Swan Stone Castle but also how to say it in German!

How to pronounce Hohenschwangau

Similar to Neuschwanstein, Hohenschwangau is easier when broken down. This word breaks down to four syllables. First ‘hoh’ pronounced like hoe, ‘en’ pronounced as it appears, ’schwan’ the same as before, pronounced like swan but aim for ‘shvan’. The last bit, ‘gau’ is pronounced like gaw. [hoh-en-shvan-gaw] In German ‘hohen’ means high, ‘schwan’ is swan, and ‘gau’ is a district or county so this castle’s name translate to High Swan County Castle.

How to get to Neuschwanstein and Hohenschwangau Castle

These castles are located in a small area called Hohenschwangau that is in a town called Schwangau (population 3200). It is located in Bavaria on the southern edge of German, near the Austrian border. The closest cities are Munich, Germany (2-hour drive), Innsbruck, Austria (2-hour drive), Stuttgart (2.5-hour drive) or Zurich, Switzerland (3-hour drive).

Flixbus runs once daily from Munich the bus is about 2 hours 10 minutes. Tickets range from 6-10€.

The train is 2 hours 32 minutes and possible but with one change and a cab drive or walk for the last 4km. The price is around 50€. 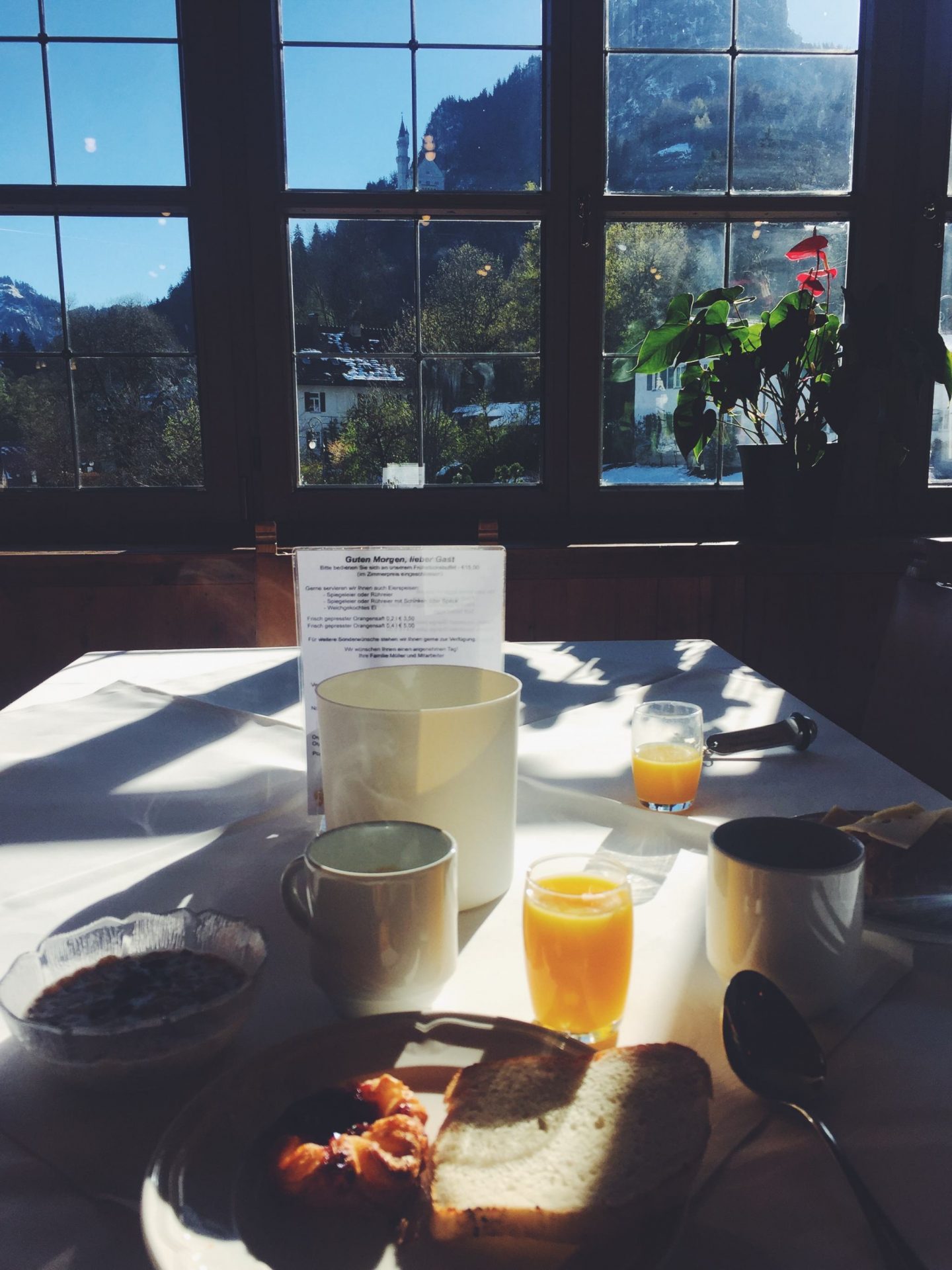 I don’t recommend hotels often but Hotel Müller is one you should not pass up! They were absolutely amazing about helping us to secure tickets for the next morning because we arrived too late to buy them the day before. Maybe the most magical part of the stay is having a beautiful view during breakfast.

They are centrally located with just a 35-minute walk to Neuschwanstein (you can’t get any closer)and a 10-minute walk to Hohenschwangau Castle. If you are arranging for a ride with the horse and carriage, the pick up is right outside of the hotel.

Neuschwanstein Castle is much newer than a lot of castles I visit as it is a 19th-century palace built for Ludwig II of Bavaria. Built within view of his parent’s castle, Hohenschwangau, it was meant to be his home and place for creative expression. A lot of the rooms were done in honor of plays, music, and opera especially the works of Richard Wagner, his close companion.

The castle was built upon ruins of two older medieval castles. Ludwig was very much involved in the process of its design. He even hired a stage designer for the initial sketches. The castle seemed to be intended purely for decorative, creative, and residential purposes rather than official royal business.

This grand castle didn’t come cheap. Unlike most structures, Ludwig paid for this project from his own funds and borrowed money personally until he was in severe debt. The total cost of Neuschwanstein Castle was around €40 million. Unfortunately, Ludwig only slept 11 nights in the castle before his mysterious death in 1886. He was found dead in Lake Starnberg with this doctor. Less than two months after his death the castle was opened to the public to help settle Ludwig’s large debts.

There are a lot of very fascinating discussions around the life of Ludwig, his relationship with Wagner, and possible causes of death which I suggest reading about before visiting these castles. I think doing prior research really adds to the experience of understanding how monumental and unique Neuschwanstein Castle really is. 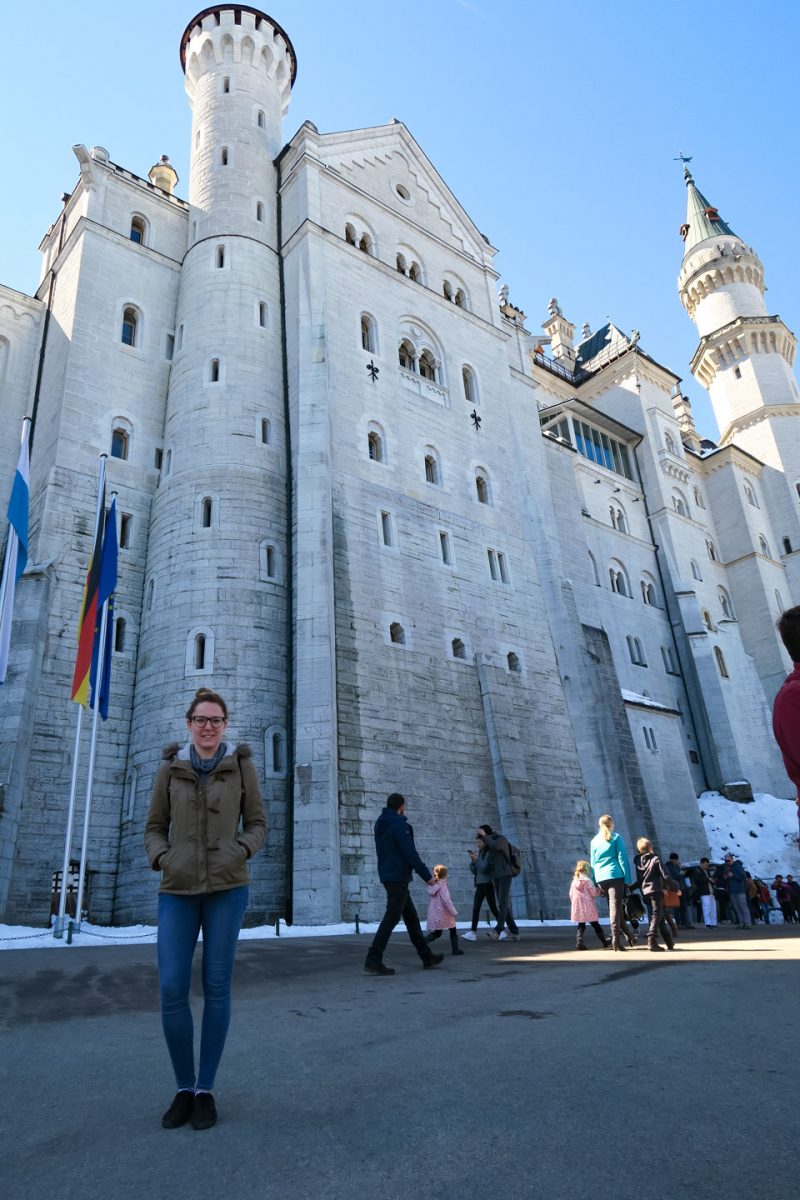 Visiting Neuschwanstein Castle is a once in a lifetime experience. I promise that you will never see anything like it anywhere else. Nothing nearly as imaginative, colorful, and pristine as this castle. Unfortunately, you can only visit the castle with a tour and you are not allowed to take photos inside.

1.4 million people visit Neuschwanstein Castle every year. In the summer it is estimated around 6,000 a day! I visited early May and I was shocked at the number of people and felt overwhelmed by the crowds. Now, because of these large crowds, I am going to offer you a few very important pieces of advice.

You MUST book your tickets in advance.

I am that person who knows this and still forgets to do it every single time – do not do this. Do not forget to get your tickets or you might risk traveling and not being able to visit the castle. The second part of this advice is if you stay at Hotel Müller to book your tickets through them. They were able to secure exclusive time slots, be sure to ask during booking if this service is still available.

If you secure your ticket online you can only do it up to 2 days prior. Remember to pick up your tickets at least 90 minutes prior to your time slot.

Visits are only possible with a guided tour. The tour takes about 30 minutes and is available in German or English. Audio guides are available in 15+ languages. 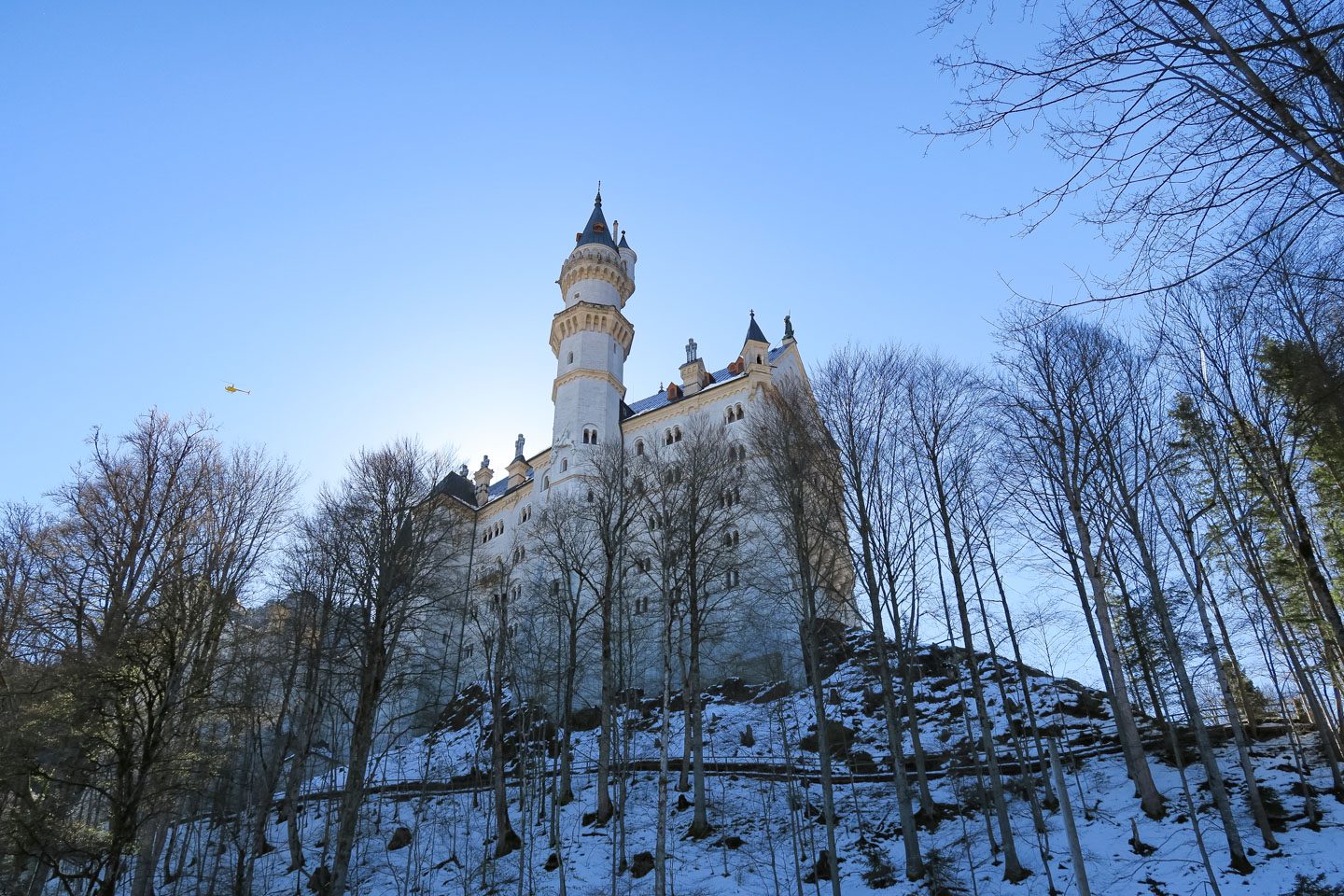 To reach the castle there is a winding steep road as you can see part of it in the photo above. Walking can take 30-40 minutes and it is a bit of a workout – wear appropriate footwear!

If you want to make the trip more magical you can pay for a horse-drawn carriage 7€ uphill and 3.50€ downhill. Tickets can be purchased from carriage driver just outside of Hotel Müller. We wanted to do this option but we ran out of time. There was a huge line for the carriages and even after waiting a half hour or so there was no guarantee we would make it to the top in time.

A shuttle bus is also available for 2.50€ uphill and 1.50€ downhill. Tickets are purchased on the bus. Find the bus at parking P4 (see map below) near Hohenschwangau Palace.

Because vehicles or carriages cannot go all the way to the top there is still a 5-10 minute walk from the drop-off point to the castle. Keep this in mind when planning your visit because entrance tickets are for specific times. You must be there when you are called or you lose your spot.

There are very few restaurants and shops in Hohenschwangau so plan accordingly. The closest grocery store is about 3km away. 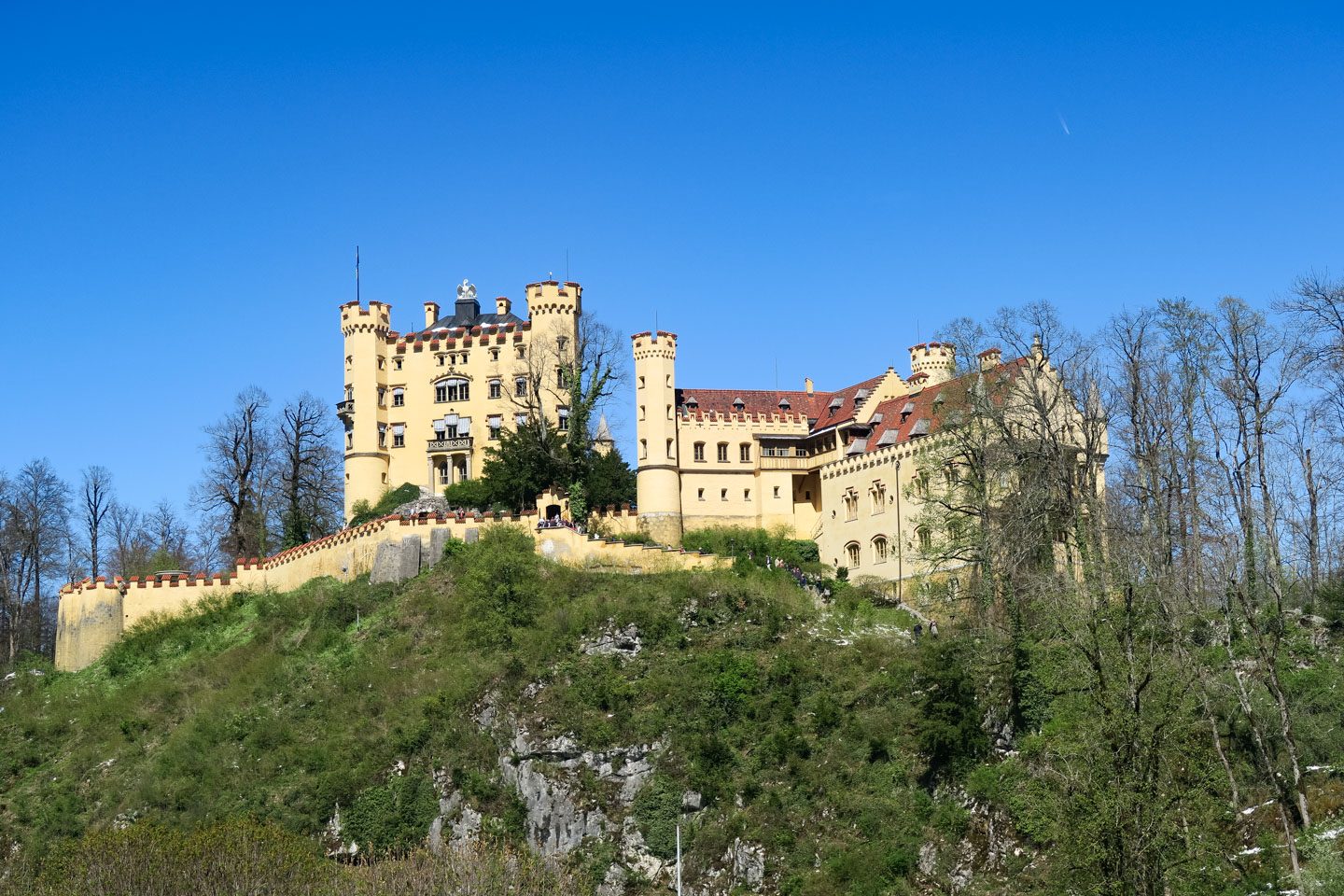 Built by Ludwig’s father, King Maximilian II of Bavaria, Hohenschwangau Castle is also a 19th-century palace. Much like his son, he purchased a dilapidated castle in 1829. At this time it was once the site of Schwanstein (a previous castle). Against Maximilian II’s father’s wishes, he began reconstruction.

Hohenschwangau Castle was the official summer residence of Maximilian II and his wife, Marie of Prussia. They used the palace and grounds for hunting, hiking, gardening, and their children spent a lot of time at the residence. After Maximilian died his son Ludwig II moved into this room, but because he never married, his mother continued to live in the castle during the summer. She continued to live there until she died 3 years after Ludwig’s death.

Hohenschwangau did not suffer any damage during WW1 or WW2 which gives a very authentic experience of this castle. 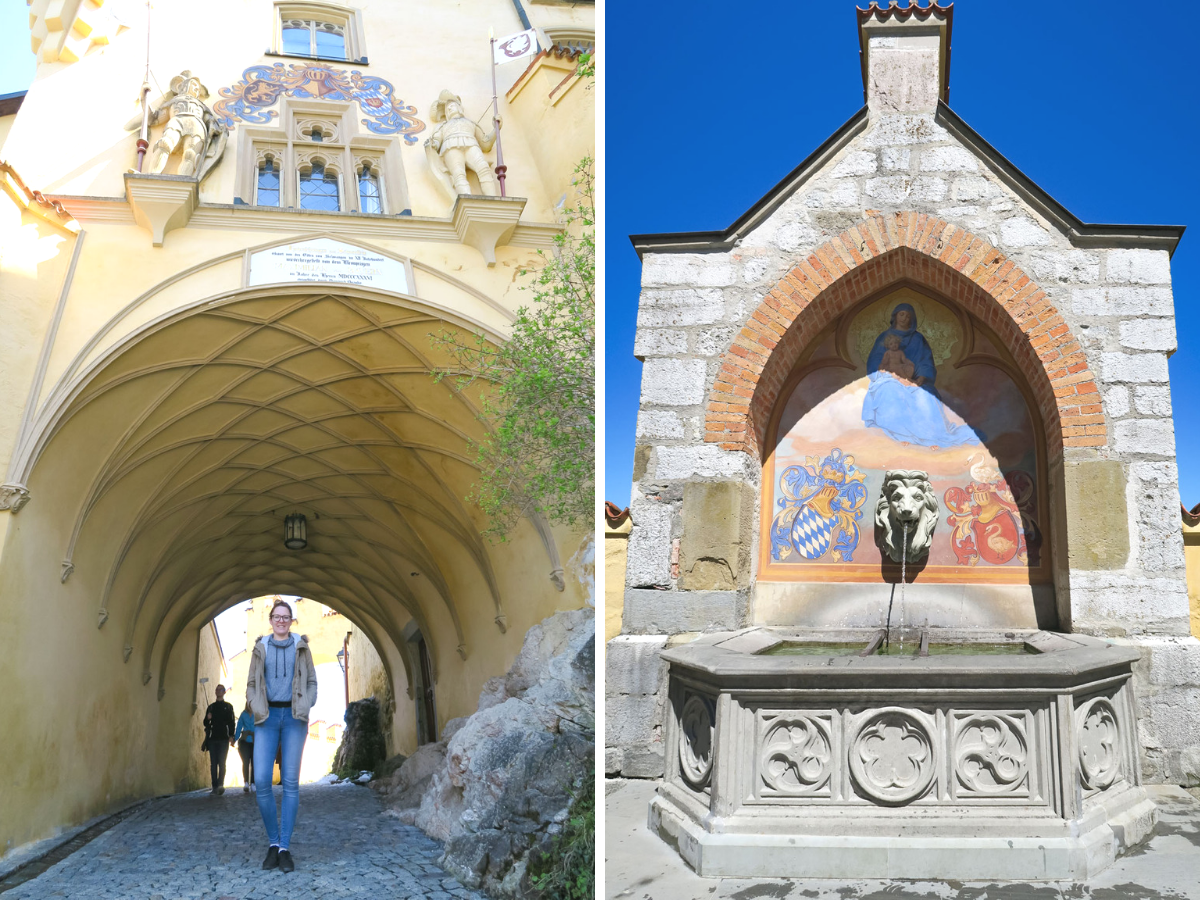 I think it was just my personal experience, but my tour at Neuschwanstein was very minimal, unenthusiastic, and the biggest disappointment of the trip. I was very happy that I did previous research before visiting, However, the tour at Hohenschwangau was incredible. One of the best castle tours I’ve ever received. The guide was passionate about the history of the castle and knew stories of every object in the rooms. I think that because this is a lesser-known castle and does not have the same traffic as its counterpart gives it an advantage.

When visiting Neuschwanstein you are walking through Ludwig’s imagination and while visiting Hohenschwangau you learn more about his upbringing and his family which gives much more context to both castles. Not to mention it is just a beautiful castle with incredible objects inside. 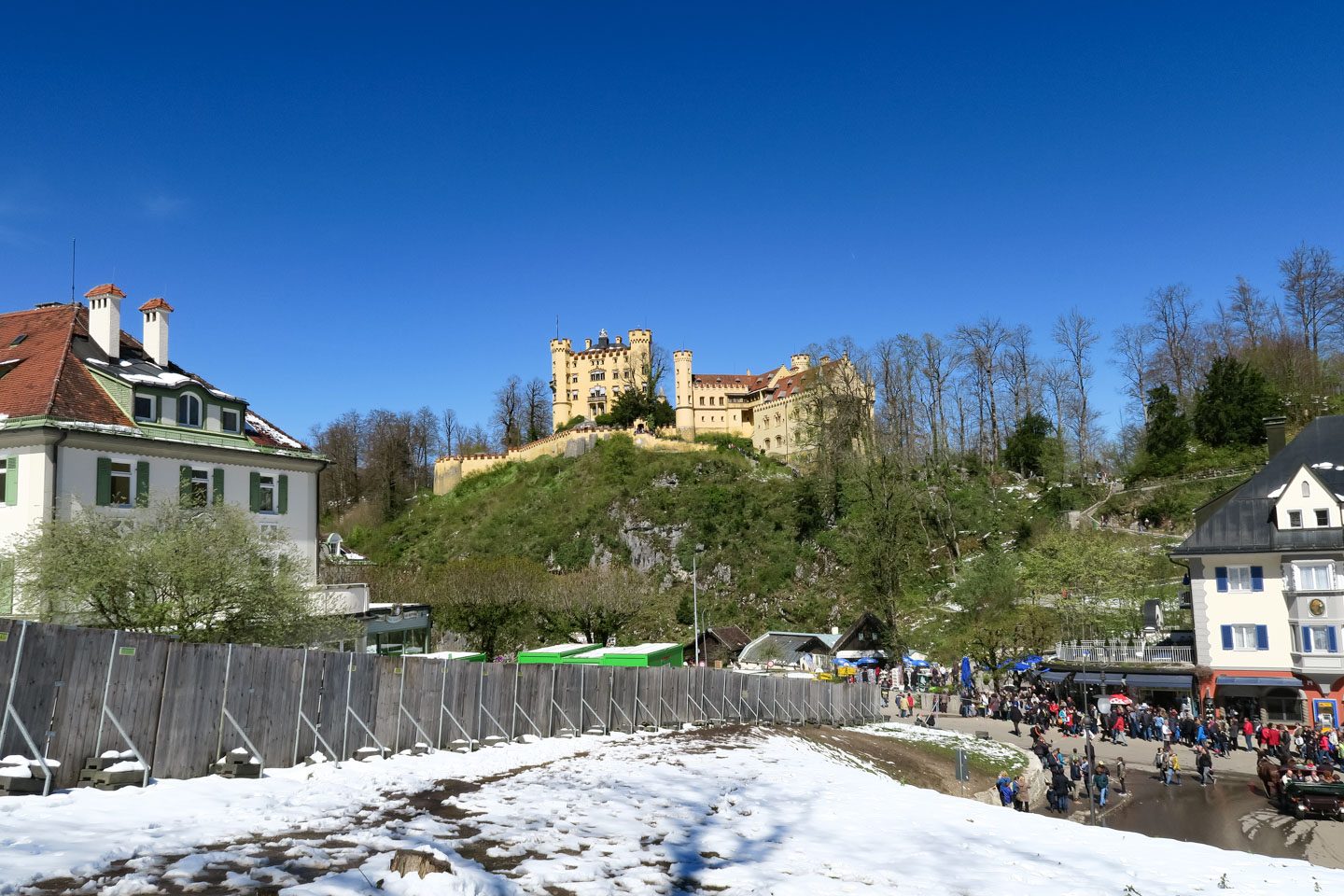 You can only visit Hohenschwangau Castle with a guided tour which takes about 35 minutes. Tours are given in German or English with portable audio guides available in other languages. There is no elevator in the castle and the tour goes up 90 steps to the second floor.

The same restrictions about reservations for Neuschwanstein Castle apply to Hohenschwangau. Be sure to reserve both of them in advance and to give plenty of time between each visit so you can walk to either castle.

Save This Article for Later!

A Weekend of Slovenian Castles