I am on a journey to visit and document as many Slovenian castles as I can. Slovenia has around 500 castles and I have only seen about 15 so I have a lot more to go. Many castles in Slovenia have museums in them that explore the local history which is part of the reason I enjoy visiting them.

For my 33rd birthday, my husband gifted me two nights in a castle. When he handed me the envelope with a photo of the castle saying we would sleep over I was speechless and just cried I was so happy. Anyway let’s get to the castles… 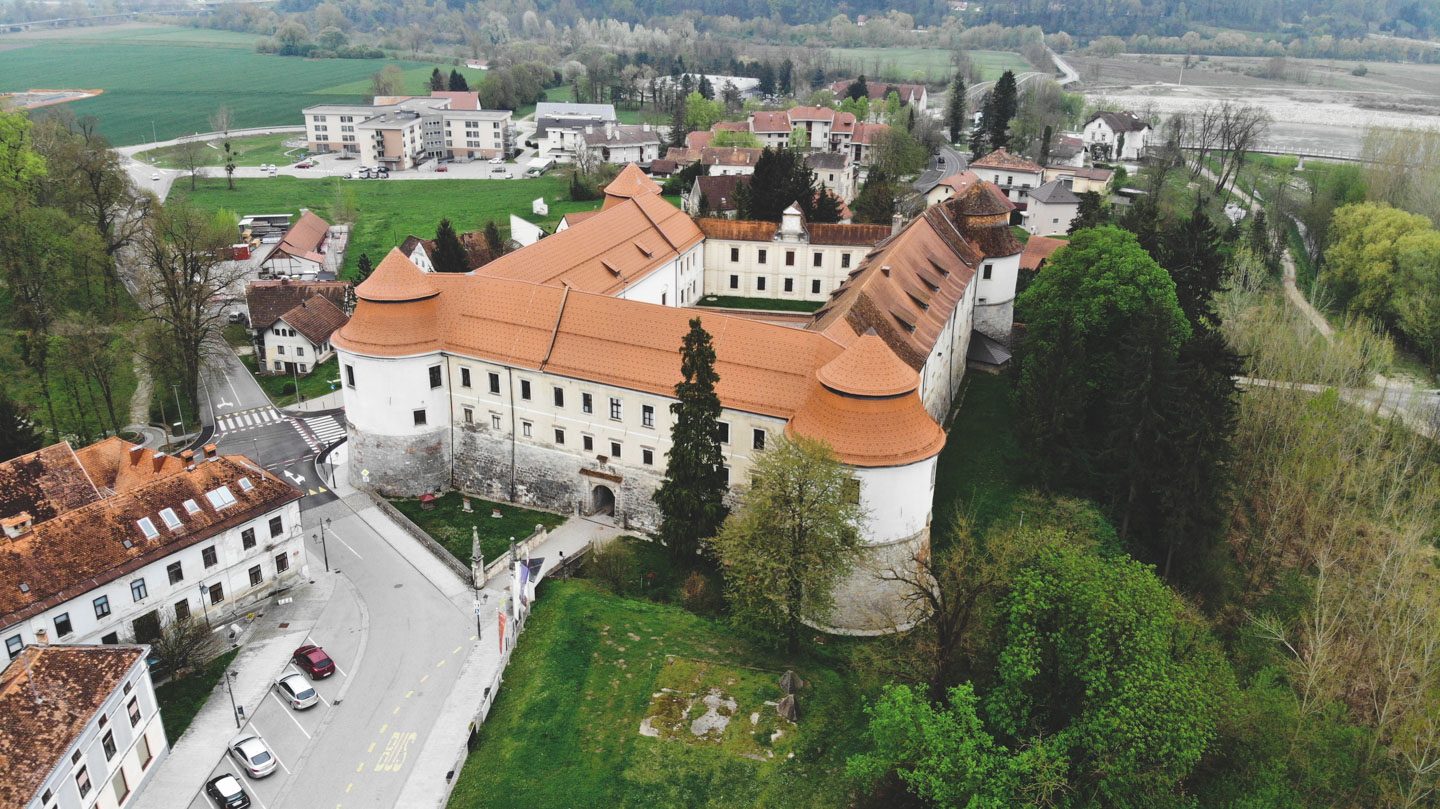 To start the weekend early we left Friday morning and explored Brežice Castle in Brežice. What a surprise it was! This region called Posavje (Lower Sava Valley) is part Dolenjska and part Štajerska and on the border to Croatia. Brežice Castle is from the 16th century and located near the Sava and Krka rivers. Before 1241 there was a wooden fortification at this site and served several purposes for the Bishopric of Salzburg. There was a later a standoff between the Habsburgs and Hungarian King from 1479 until 1491 when it was then transferred to the Habsburgs.

During the great peasant revolt took place 1515, the Brežice Castle was burned by the locals after knights captured 500 wives and children and sold them into slavery in Croatia. There were several other incidents of the castle falling into disrepair and being rebuilt again. In the mid-17th century the castle began to pass ownership between nobles who filled it with furniture, restored paintings, filled the moat, and other remodeling efforts. It was nationalized in 1945.

One of the later owners of the castle, count Ignac Maria Attems had a couple rooms painted with baroque art. You can see them when visiting the castle. Posavje Museum is housed in the castle which explores the history of the Posavje region from when it was first settled to modern times. There are many exhibits throughout the castle exploring the peasant revolts, art, and archaeology. One of my favorites was Under the nine flags: Posavje 1900-1990. I learned a lot about this region and Slovenia. Looking for food in Brežice was not easy! We tried several places I found online but they were closed. We decided to try Gostilna pension Les. It appeared more touristy than we like to venture but hunger was calling. This place is also a hotel and it’s really nice inside. The smells from the restaurant immediately changed our mind. We ordered a mixed plate and it was so good. We then drove to Mokrice Castle which is a beautiful structure surrounded by a lot of green. You are greeted by knight’s armor outside of the reception. Once we had our room key we ventured up the stairs to the third floor where we would be staying. Let me tell you, when staying in a castle, you feel fancy. So naturally we filled our huge bathtub with bubbly hot water and had some gin and tonics. If you are planning on staying here I advise to stop at a store to buy some refreshments there isn’t a bar on site or store within walking distance.

Later we went downstairs to the restaurant and we were the only people in the whole place – this was the first night they opened for the season and we showed up a bit after 9pm. Not to bother the chef we ordered meat and cheese plates that were delicious. Then off to bed and the next day we went to Čatež Terme. After our day at Čatež (more info below) we returned to Mokrice and took some drone shots and photos and went to dinner. A four course meal in this fancy castle restaurant will run you 20€ a person! We started with wild garlic soup which was perfection. Then a shrimp risotto for our second plate. Then for the main dish steak on Slovene french toast (pohana šnita), rolled turkey wrapped in bacon, štruklji and for dessert a fruit and cream cake. I would highly recommend checking out this restaurant if in the area, but the waiter told us that the chef is relocating to Otočec Castle soon, so I guess I am recommending their restaurant. Mokrice Castle seems to mainly be known for its golf course and as a golf hotel. It is a medieval castle in southeastern Slovenia. It is the last stop on the highway from Croatia. We could literally see the border check from our room window. There is almost no history written about this structure. Only that it was first mentioned in 1444 and rebuilt in the 16th century and in 1941 (thanks wiki).

If you stay at Mokrice Castle you also have access to part of Terme Čatež. We spent the day relaxing in the whirlpools and a larger warm pool. Walked around the grounds of Čatež to find some food and ended the day with much needed massages. Sorry no pictures here just a day without my phone relaxing! On Sunday we had to check out of the castle, but since we were already in this region why not find explore another castle. I choose Brestanica Castle (also known as Rajhenburg Castle) which was semi on the way home. Not knowing what to expect it was a pleasant surprise. The castle structure itself is a bit plain, but where it is located is what makes it exciting. One of the oldest medieval castles in Slovenia dating back to the 9th century, but the current structure is 16th century. The castle once was the home to the only Trappist Monastery in Slovenia. You can see an entire exhibit about them and the products they produced (chocolate and liquor).

During WW2 the castle had a very unfortunate purpose and was used as a central camp for deporting local Slovenes. Around 45,000 Slovenians were taken from their homes, sent to Croatia, Italy, Austria, or Germany, and Germans came to take over their homes. Now, Brestanica Castle houses a museum, contemporary art exhibits, a cafe, and wedding hall, typical facilities of Slovenian castles that are still in use. I really enjoyed the museum inside of the castle, similar to the one in Brežica Castle. It was diverse, informative, and interesting. The best part of both museums we visited is that they had almost every detail also in English. Often times you might get the highlights in English but rarely the small signs, captions, or titles of items. The exhibits include one on the Trappist order, photographer Vinko Bavec and postcards from Brestanica, 18th and 19th century furniture, modern art, local history, and a large WWII exhibit exploring the subjugation of Slavic countries by the Nazis

When walking through the rooms you might notice at one point an empty room but if you pause you can see light remnants of secular Renaissance frescos by Marija Gradec from 1530. To finish things off we stopped in the museum cafe for a slice of cake and coffee. Everywhere we went in this region seemed very serious about desserts. Everyone had beautiful cakes of endless combinations.

Pin this article to save for later or share with friends.

As always, I am so happy that you are here and thank you endlessly for your continued support of this blog! If you liked this article, please consider sharing it with a friend. The more this blog grows, the more content I can offer. Follow my daily adventures via Instagram.