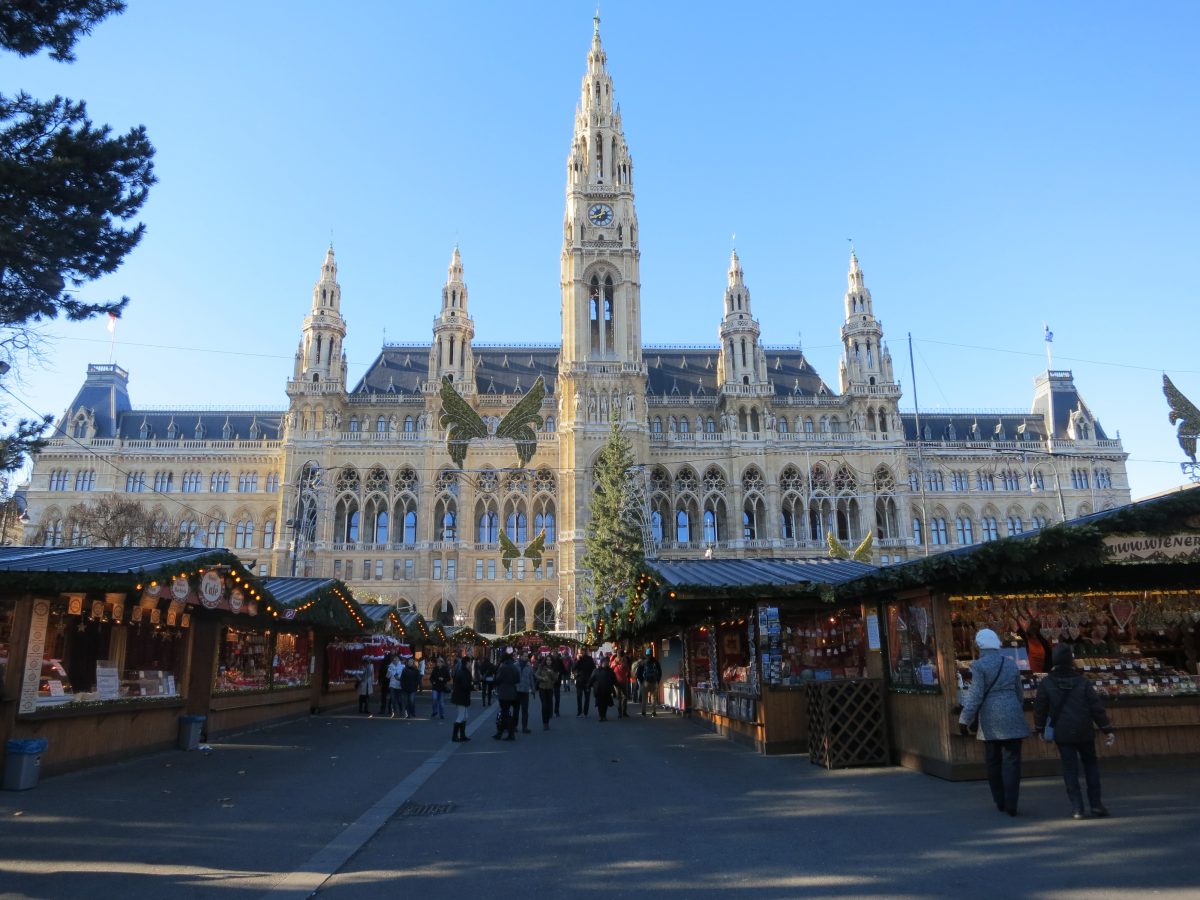 Visiting Vienna is probably one of the first items I added to my life wishlist (aka bucket list). As a young girl I would play classical music and dream of one day visiting the city famous for being the home of Mozart, Beethoven, Haydn, and Brahms to name just a few. Listening to their great symphonies and concertos I imagined myself performing them in great halls across the continent.

As is the story for many, my childhood dream has since faded but the core of it remains. My desire to visit Vienna and the places some of the greatest musicians of all time have performed or sipped coffee while chatting with colleagues has not faded.

Yes, I am romanticizing Vienna which was also the seat of power for an imperial force. I currently live in a country that was under its control and see its influence. Sue me for indulging in a fantasy I created as a child.

DISCLAIMER: This post contains affiliate links which means I may receive a commission on purchases made through the links. This is at no additional cost to you and helps keep the site running.

Staying in Vienna longer? Check out these articles

Itinerary for 2 Days in Vienna

You could probably spend a week in Vienna and just scratch the surface of what is possible, but that is not possible for everyone so I am sharing an itinerary that you can use to spend 2 days in Vienna. I will include some additional activities you can add below to extend your trip.

I organized this itinerary with spatial awareness and balancing activities. I visited for 4 days but took it very slowly because I wanted to spend time in the cafes, wandering local shops, popping into get treats when the smells and sights enticed me.

Most of these activities can be done via guided tour or with a audio guide. Be sure to book in advance for the former, and be aware that some places are closed on Mondays or Tuesdays in Vienna.

Rathaus is the seat of local government, also known as city hall. Constructed in the 1800s in the Neo-Gothic style. It is located in Rathausplatz in the center of Vienna.
Guided tours are available in German on set days and times but an audio guide is available for free in English, French, Italian, and Spanish. Check tour times here.

The Hofburg Palace was a formal imperial residence and now houses the Austrian President and a museum. A combined ticket will give entrance to the Sisi Museum, Imperial Apartments, and the Silver Collection.

The Silver Collection was not something I would normally see but it was incredible and impressive while at the same time a gross display of wealth.

The Imperial Rooms were beautiful but the audio guide was boring because a lot of the content was repeated from the Schönbrunn Palace audio guide. If you choose to do both then you can easily cut out a lot of the audio on one and shorten your time there.

Cafe Frauenhuber is said to be one of the oldest cafes in Vienna. Beethoven and Mozart both performed here in the 1700s. I loved how if you didn’t know the history of the cafe, you wouldn’t even realize it.

In spite of its historical importance the cafe is far from pretentious. I had a lovely visit to enjoy some topfen pancakes. I took my time as I soaked in my surroundings imagining what it would have been like hundreds of years ago.

Albertina is an art museum that is housed in an old Habsburg palace in the center of Vienna. It has collections of paintings, sculptures, photography, architecture, state rooms, and also the most important print rooms in the world. The most famous exhibition is Monet to Picasso showcasing moderisnt art.

I thoroughly enjoyed this museum and was even able to catch a temporary exhibit on Edvard Munch; Love, Death and Loneliness.

A bit outside of the center of Vienna is the Danube Tower, the tallest structure in Austria (252 meters). The tower has a high-speed elevator that takes you to the top in 35 seconds.

At the top you can visit two revolving restaurants that offer views of Vienna and the Danube River. The upper one is an upscale restaurant while the lower one, which I visited, is a cafe. There is also a viewing platform although when I visited mid-November it was a bit too cold to stay.

Close to the Danube Tower is Wurstelprater, or simply called Prater. It is a large public park which also contains the oldest amusement park in the world. The Prater was first mentioned in 1162 and it was donated to the people of Vienna in 1766.

Prater is open 24/7 all year and entrance to the park is free while there are costs for individual attractions. It is here that you can see the Giant Wheel that has become an iconic part of Vienna’s skyline.

If you are visiting in the winter I don’t suggest visiting Danube Tower and Prater in the evening as it was -bitter- cold. Instead book tickets to enjoy a 4 course dinner at the Restaurant Johann inside Kursalon Vienna and end your evening with a concert complete with opera singers, ballet dancers, and instrumentalists.

For your second day in Vienna I suggest starting off at Schönbrunn Palace since you will need to take the metro (or drive if you have a car) to the southwest edge of Vienna. I suggest giving yourself the entire morning to explore the palace and then head back into the center for the rest of the day.

The Schönbrunn Palace was one of my favorite experiences in Vienna. As a self-proclaimed castle and palace enthusiast this one did not disappoint. The palace was formally the summer imperial residence, most notably the residence of Franz Joseph I, the longest reigning emperor of Austria. Mozart performed at the palace at just six years old.

There are two tours; the imperial including 22 rooms or the grand tour including 40 rooms. I did the imperial and once I finished I regret not getting the grand tour (just another reason to return!). The rooms are incredible and the audio guide is so captivating that you sense of time. For context of how large the palace is, it has 1,441 rooms total!

After the tour, you can explore the gardens and walk to the Gloriette. During the summer there are more parts open to explore.

The vibrantly colored tiles stand out on the roof of St. Stephans Cathedral, the centerpiece or Stephanplatz. The church has been the location for many important events throughout history. You can visit the church to see the cathedral self-guided or with a tour. There are catacombs below the church showcasing the Habsburgs’ unique burial rituals but this must be arranged with a guided tour. For a bird’s eye perspective of Vienna you can purchase a ticket to climb the 343 stairs to the top of the south tower.

One of the most famous places to visit in Vienna for tourists is Mozarthaus. It was Mozart’s residence from 1784 to 1787. You can visit his residence where he wrote the famous opera “Le Nozze di Figaro”. The residence is more a museum now filled with replicas of old furniture, photos documents, and an audio guide to walk you through.

This was my most anticipated activity but also was the most disappointing. Many of the pieces in the residence are copies or replicas. There are a few original items but for the cost and the raving reviews I expected something different. I included it on this itinerary as many people would love to visit and many people do really enjoy the experience – it just wasn’t for me.

Years after visiting this cafe I still dream of the coffee and topfenstrudle (cheese strudel) that I had. Every Friday and Saturday you can see live music in the cafe. While classical composers aren’t known for frequenting this cafe it is one of the last remaining traditional Viennese cafes and worth a visit.

If you plan on visiting the palaces hoping for decorated rooms this might not be for you as it was primarily art exhibits. Check the official site for opening times and prices.

On Sundays for a few hours, they have their own trio that performs (for free!) while you dine in the cafe. I wanted to see live music but didn’t have time for a 3-hour concert so this was my creative substitute. I also wanted to immerse myself in Austria culture, or maybe just a dreamy idea of what I imagined to have happened years ago in the time of Mozart. Regardless, I was there with Viennese coffee and topfenstrudle and apfelstrudel (apple strudel) to enjoy along with the wonderful music.

Experience classical music live in a breathtaking setting inside St. Anne’s Church. In an intimate setting inside a church from 1320. Classical pieces from Mozart, Beethoven, Haydn, and Schubert are performed by a string ensembled.

If you are visiting during the holiday season then you might catch the Christmas Markets. In Vienna there are markets across the city. I visited the one at Rathaus and Schonbrunn. They are a great place to sample traditional Austrian food, drink some punsch or gluhwein as well as pick up some handcrafted christmas decorations.

Check out this complete guide to christmas markets in Vienna.