When I say Bologna, Italy is underrated by travelers, I really, really mean this. Underrated gets thrown around a lot and often times I’d argue it is misused but in the case of Bologna it is true. When most people travel to Italy they have Rome, Venice, or Florence in mind or even Milan, Naples, Cinque Terre, or the Amalfi Coast, yeah I know Italy has a lot to offer. Which is why it is one of my favorite places to travel.

When I told friends and family I was going to Bologna for the weekend they asked “why?” my response was simple, “to eat everything”. I have an undying obsession with Italian food that simply cannot be satisfied. There is something very sensory around the culture of food and dining in Italy. Going out for food is an experience or even an event. It is social, it is slow and carefully calculated. It is a ritual that is learned and honed. I’ve had the great honor and opportunity to learn this ritual while living in Italy and traveling there quite regularly over the years.

Bologna is this beautiful amalgamation of medieval architecture and endless Italian culinary options. Every street is full of shops and restaurants selling local wine, cured meats, fresh handmade pasta and pastries, and you literally cannot try everything even if you tried. Being the anti-tour person that I am, when I convinced Jaka to drive us to Bologna for the weekend, I decided that we would create our own spontaneous endless food tour. While we didn’t even come close to scratching the surface of diving into all that Bologna has to offer I think we had a successful weekend.

Now to share my most gluttonous experience in hopes that it might inspire you to consider Bologna for your next trip. In some selfish way I also hope to inspire you to skip the major sightseeing tours and let yourself get immersed in new places. Let yourself notice the small details, the smells, the way people interact with their home, with one another, and allow yourself to blend in. 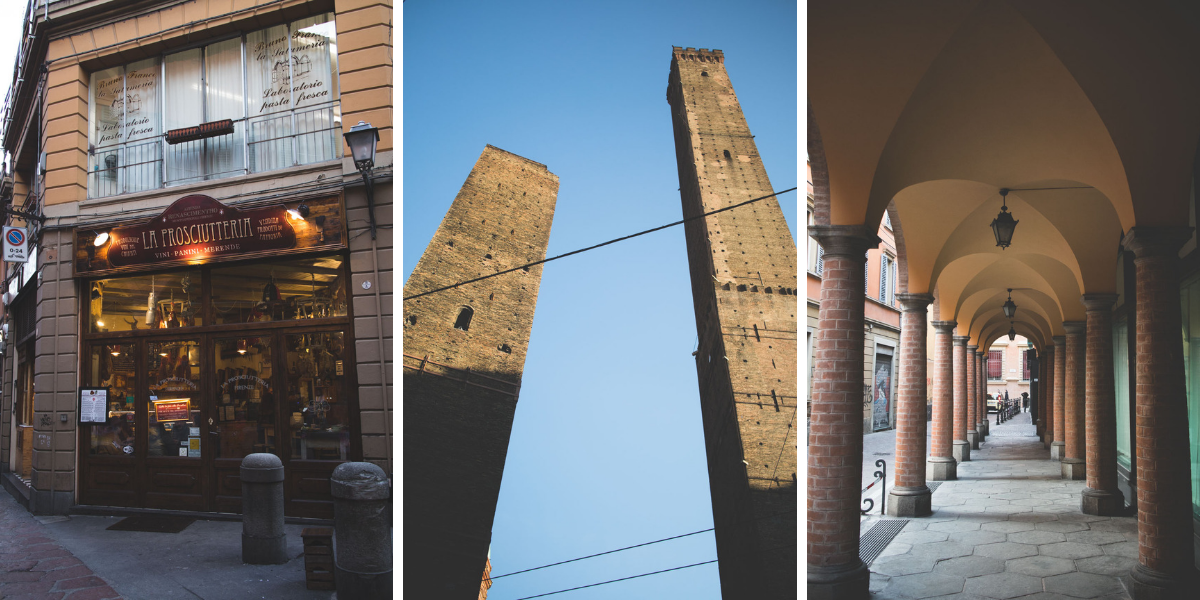 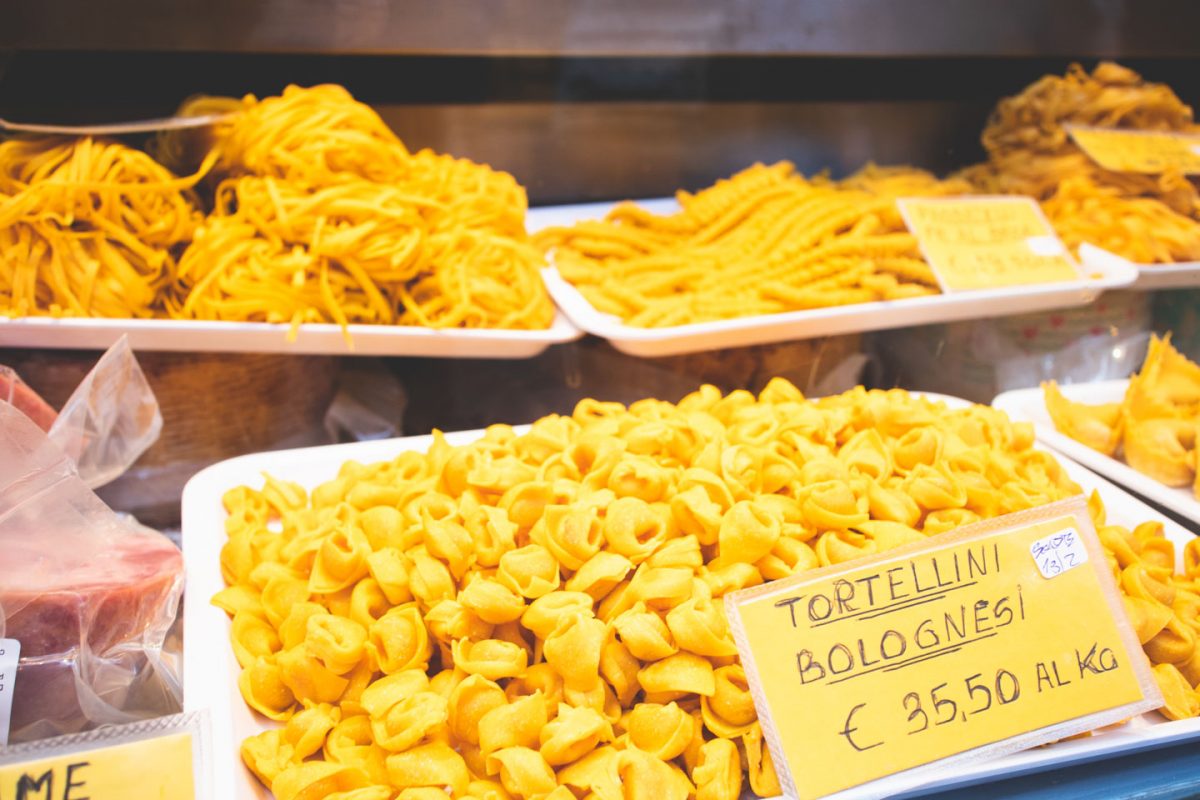 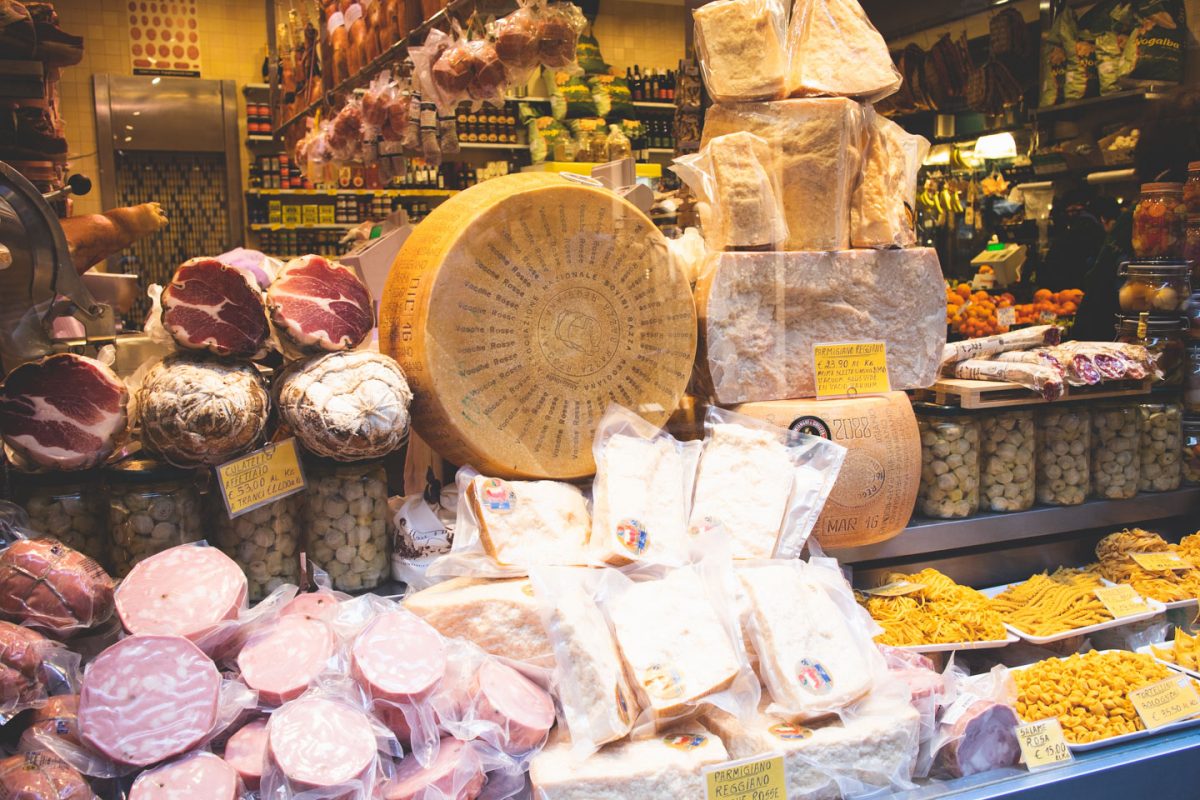 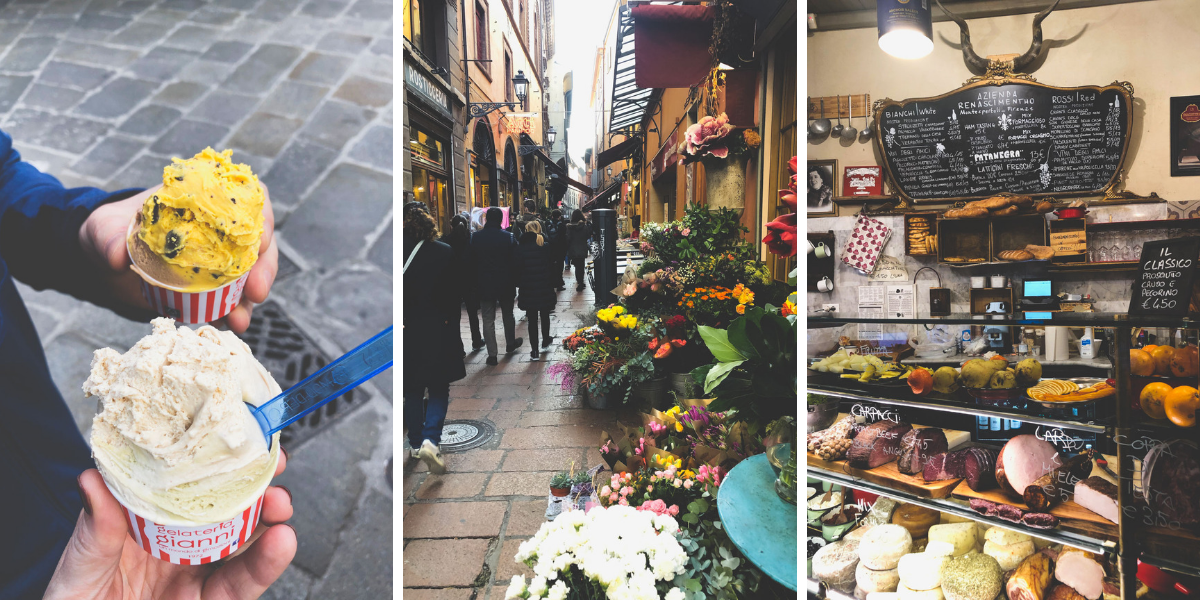 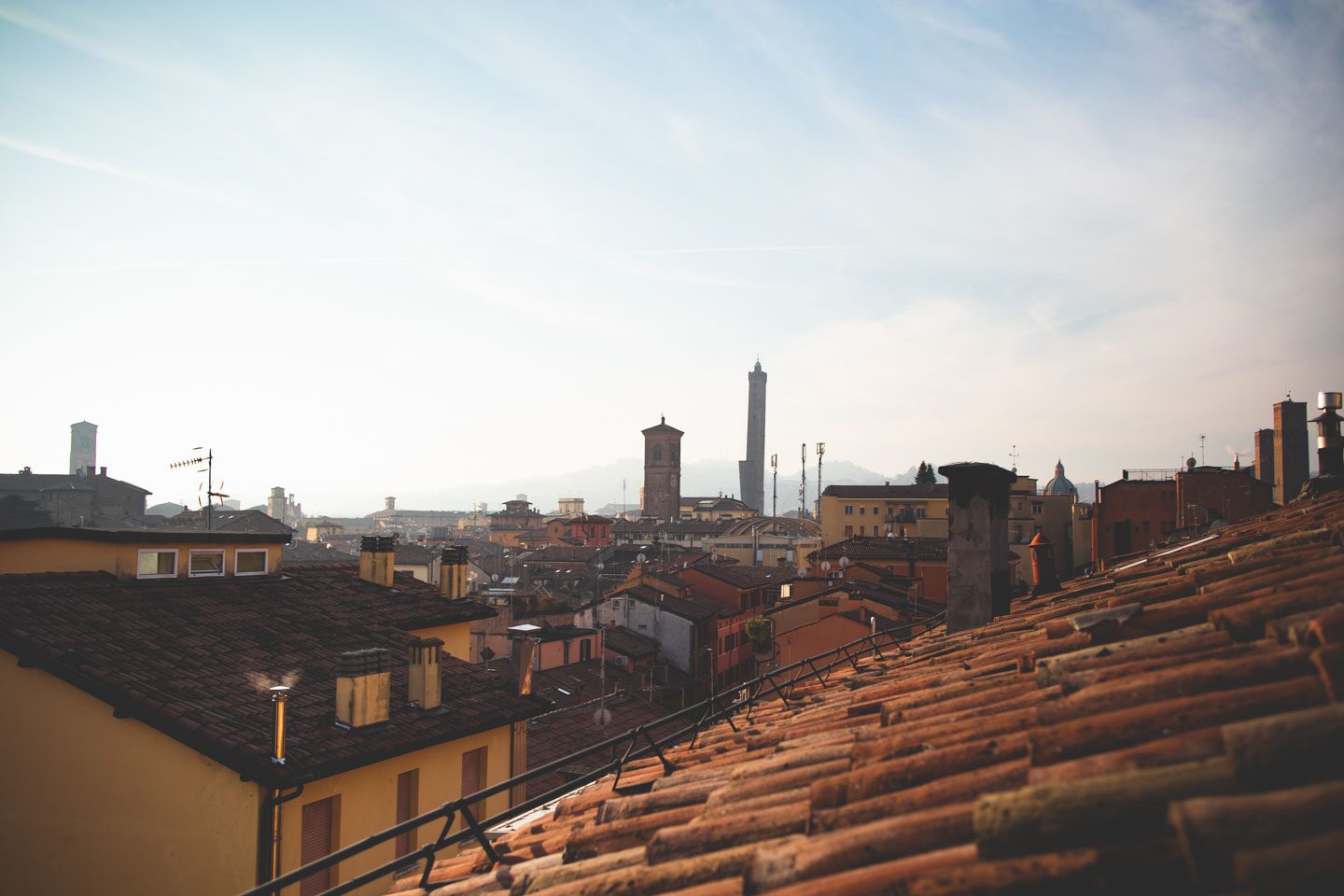 The first day we arrived in the afternoon, later than the usual lunchtime in Italy so food options were slightly limited. I remembered about Mercato di Mezzo (Via Clavature, 12). I had eaten there years ago my first time in Bologna so we took the walk into the center to see what we could find. The picture above with two plates of pasta and glasses of wine is from there. Jaka opted for the local tortellini al ragu and I tried something different tortelloni zucca (pumpkin) with a Parmesan sauce. Afterward, we stopped in Gelataria Gianni (Via S. Vitale, 2a) to try something sweet. Of course, I always go with my standard pistachio and hazelnut. Don’t let this place fool you, it is right near the two towers (Le due Torri) and looks like it is a big tourist spot but the taste does not disappoint. Trust me, I’ve had my fair share of gelato.

The Archaeological Civic Museum (MCA) of Bologna was our next stop. I wanted to see the renowned Egyptian collection (mummified cats included) and browse the prehistoric artifacts from the area (which are a must-see for the curious).

As we were walking back to our accommodation we noticed La Prosciutteria (Via Guglielmo Oberdan, 19/a). We couldn’t resist going in and ordering a tagliere (literally means chopping board in Italian, but is used for meat and cheese boards) with some wine. The picture above that shows a range of meats, cheeses, and fruit on a board is what a medium looks like! A small bite to eat soon turned into several hours of snacking on these delicacies, sipping wine, and taking in our surroundings. We were so full we ended up skipping dinner that evening. 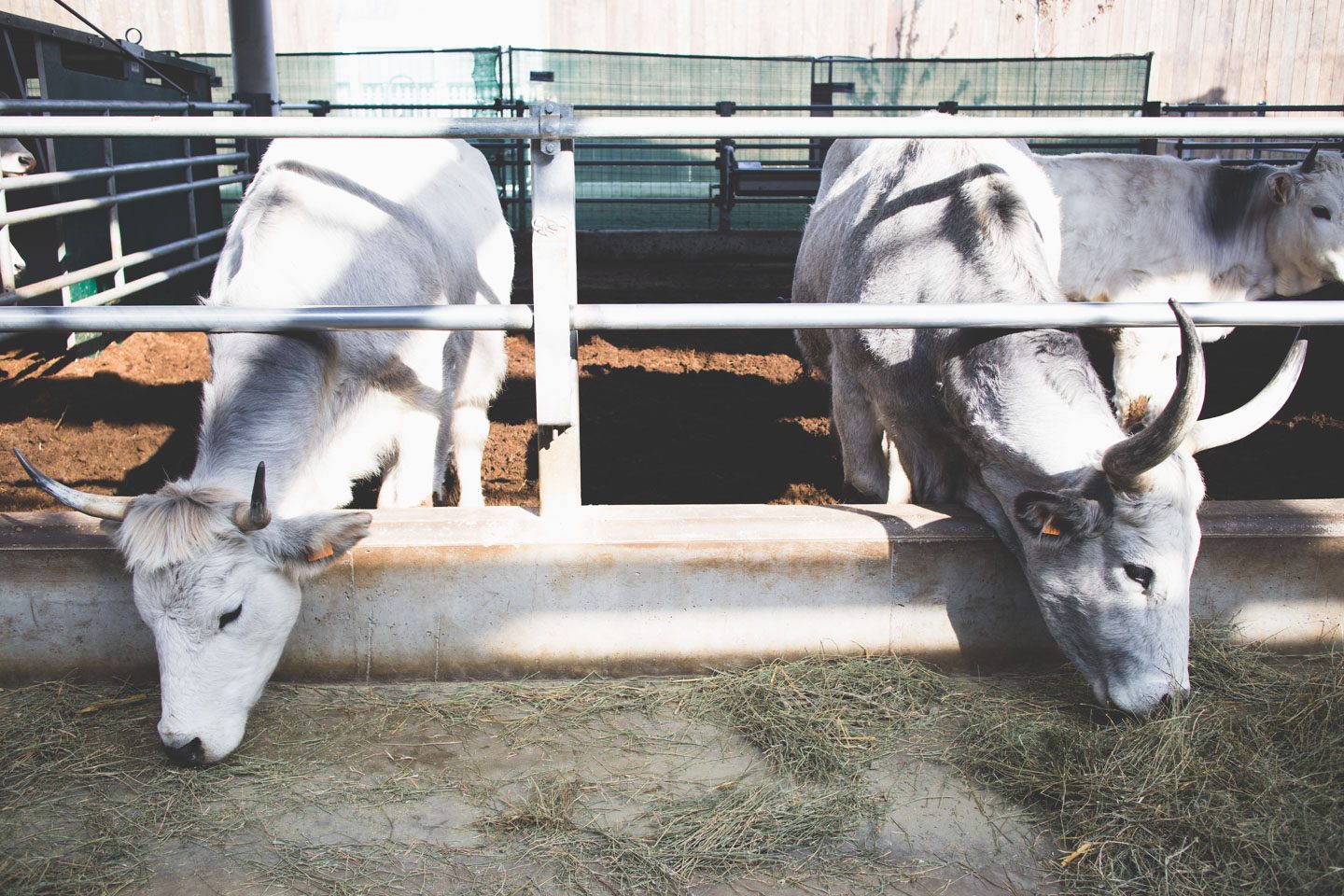 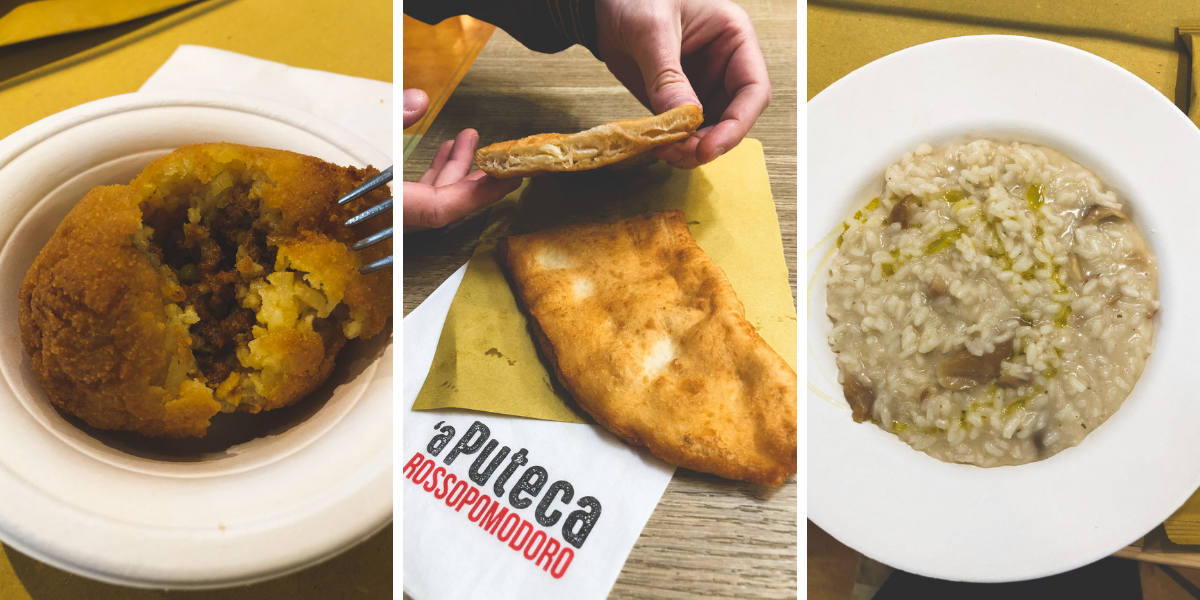 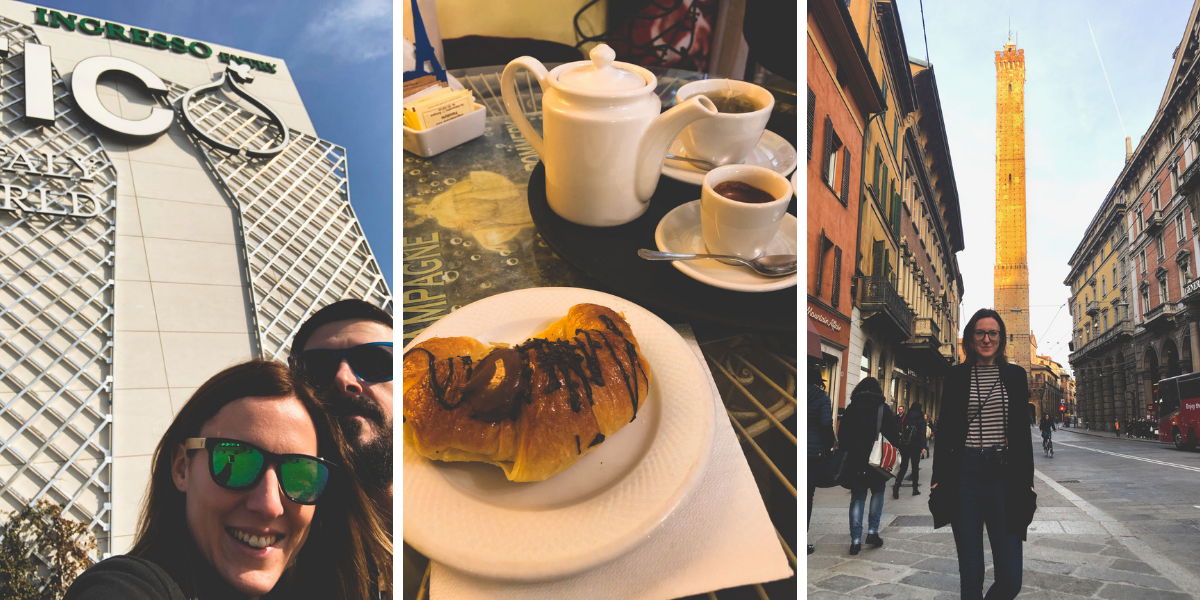 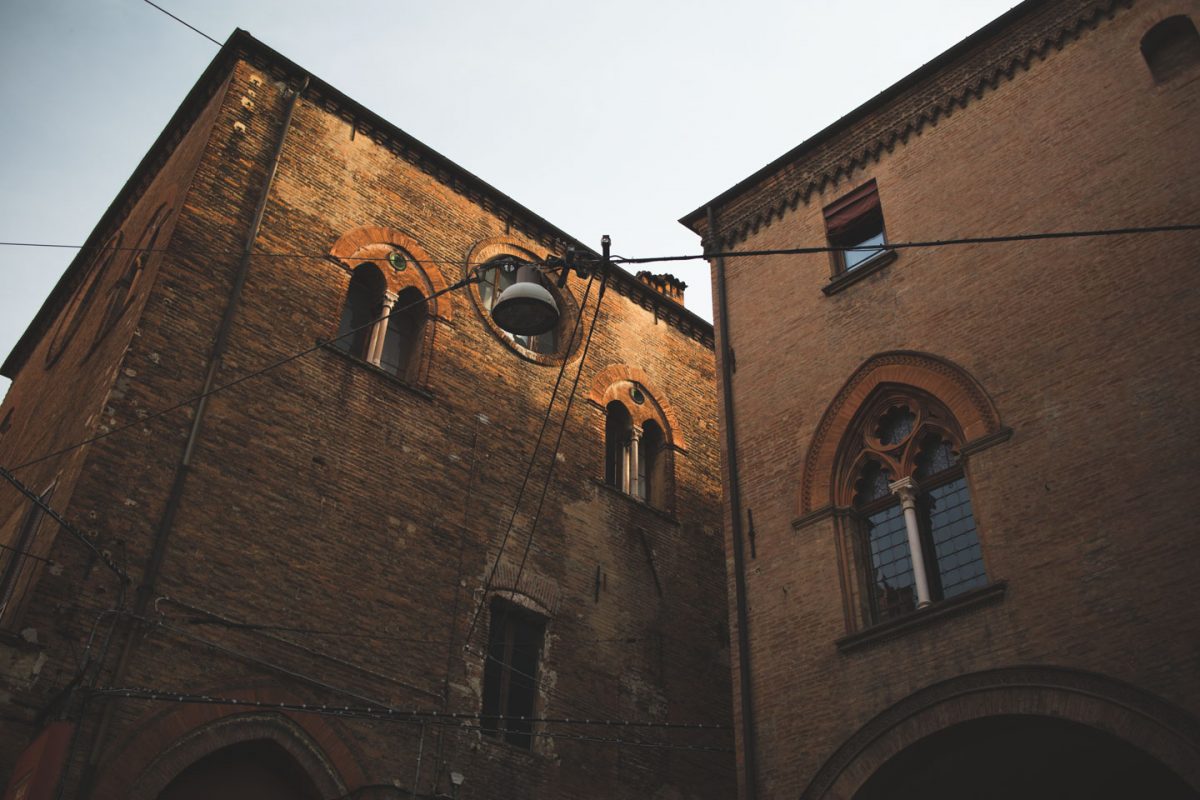 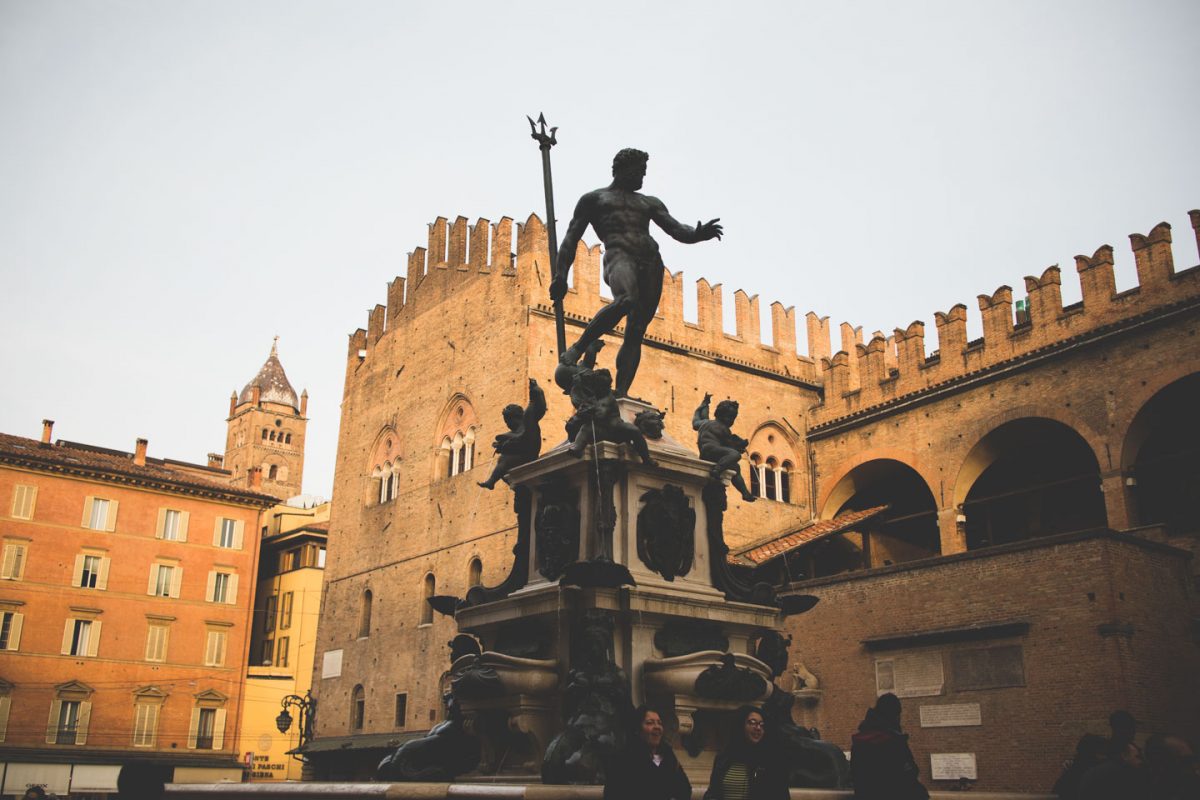 On Saturday (and Sunday) we had breakfast at Opera Caffè e Tulipani (Via Alessandrini, 7). It was a small cafe down the street from our Airbnb with beautiful pastries and a friendly vibe. The first day I went for the Nutella cornetto (while it looks like a croissant, it is not!) and the second day, a pistachio filled one. The caffè (espresso) was perfect. Jaka is more a savory breakfast person, as are many Slovenes that I have met, and he enjoyed a prosciutto piadina (a flatbread sandwich made in this region of Italy) both mornings.

An afternoon at Eataly: The Largest Food Park in the World

Afterward, we were off to Eataly Food Park just outside of Bologna. I read very mixed things about the place but having been to Eataly in Rome and Milan I was curious. Outside you can find small gardens, a vineyard, and a range of animals. Inside felt like a huge shopping mall dedicated to food. You can watch the production of different products such as Grana Padano (cheese), coffee, chocolate, pasta, pizza, and more. There were endless restaurants, kiosks selling Italian products, samples, and a store at the end.

While the porcini risotto from Il Risotto will be a dish I dream about for years to come (I swear!) the whole experience can feel a bit sterile and.. shopping mall-esque. It was very overwhelming with more choices than I could imagine, but also a bit pricey and no option to do tastings at every place, or even the option to do half portions so you can try more than 1-2 dishes. I actually prefer the Rome or Milan locations because they feel more intimate and offer a lot more choices for specialty items to purchase.

After returning back to Bologna with full bellies we ventured around the city so I can take pictures of beautiful buildings and just enjoy each other’s company. We stumbled upon Mercato Delle Erbe and at first glance inside it was just fruits and vegetables, fresh fish and meats, and handmade pasta. There were plastic sheets hanging from the ceiling like in a factory and we wandered through to find a hidden area with four to five small restaurants and tables all around. We ordered a small tagliere and two glasses of wine.

Soon after we wandered all around Bologna’s center, we landed at the Pinacoteca Nazionale di Bologna (National Art Gallery of Bologna). Full of paintings from this region during the 13th and 14th centuries and a few later ones from the 17th century. Very heavy on the religious themes, but some incredibly impressive works that I have never seen before. 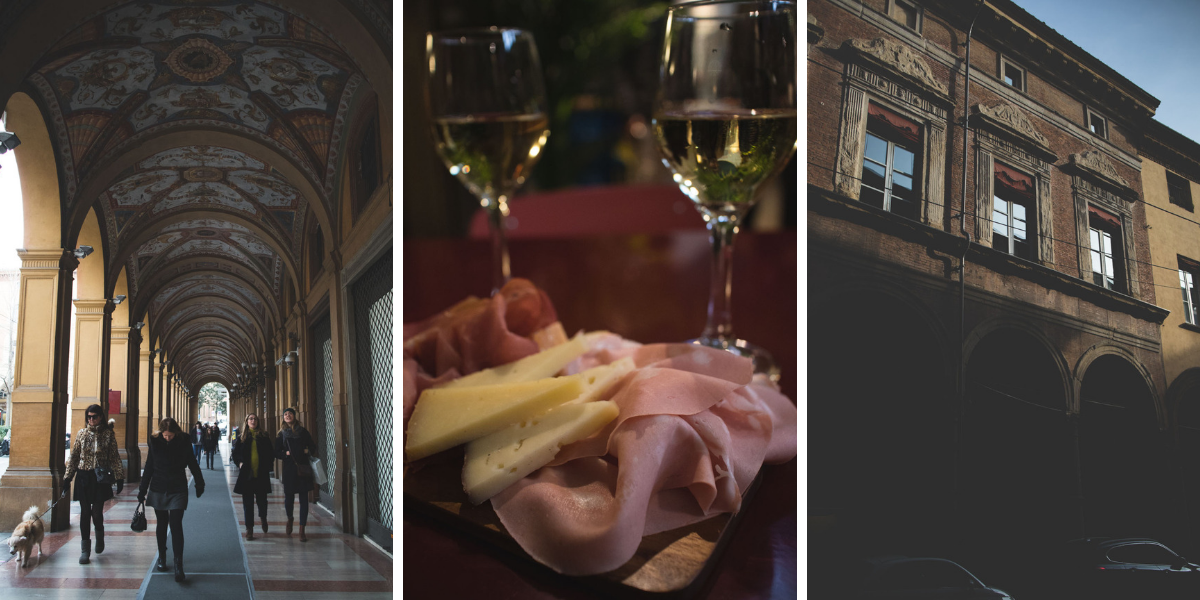 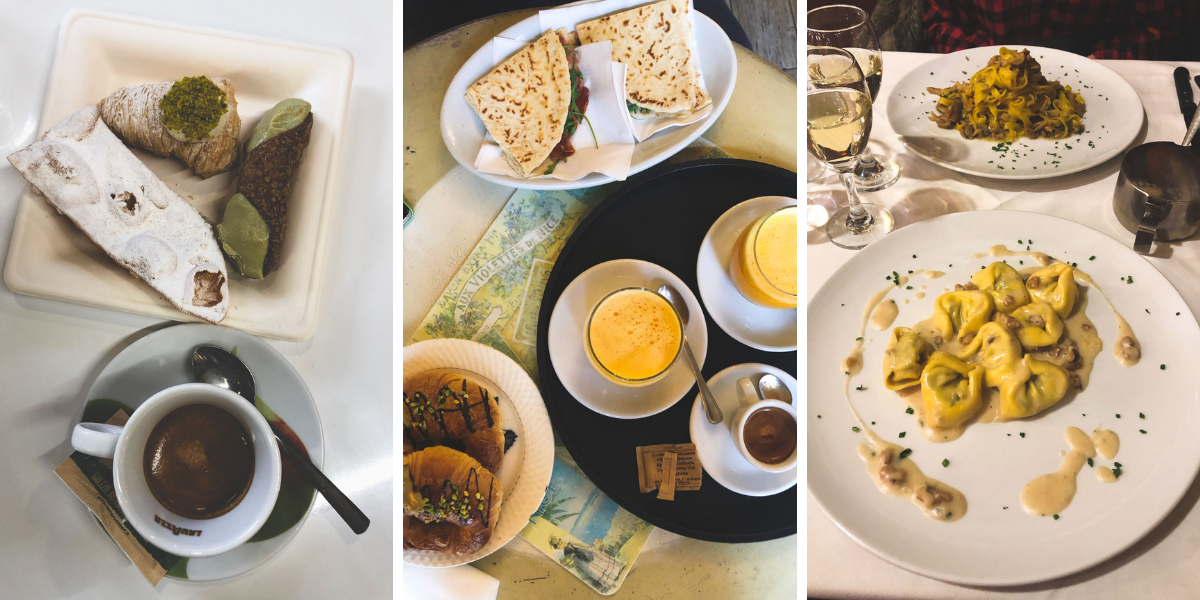 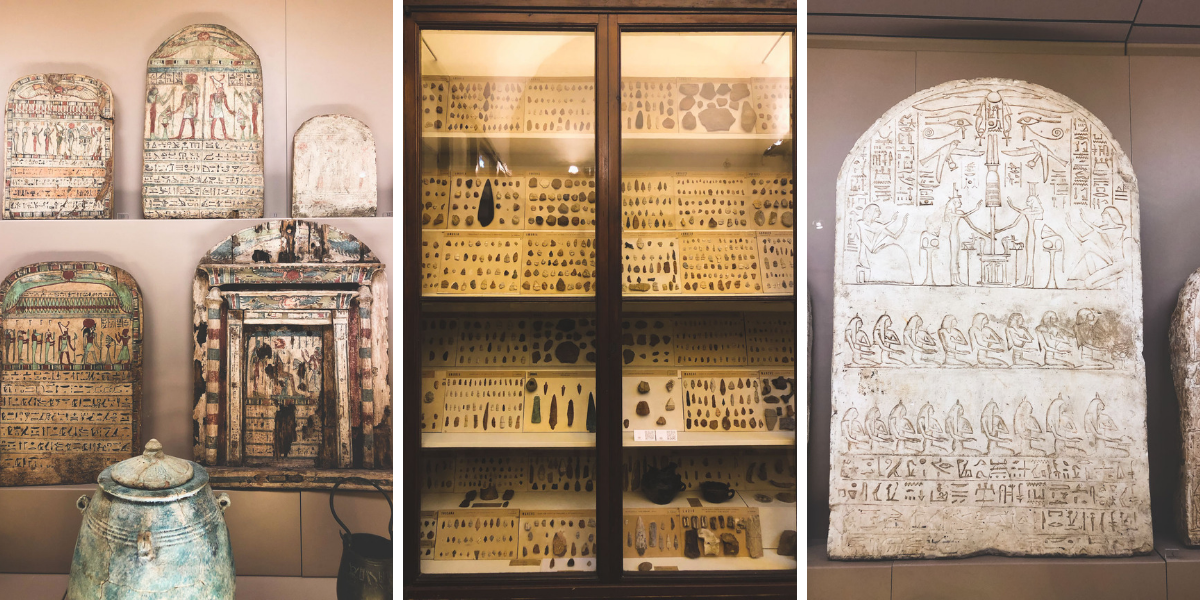 To end our self-guided eating tour of Bologna we dressed for a night out and with a few recommendations in hand, I was sure we were going to eat wonderfully. The first place we stopped at, which I saw was recommended several times by people who seemed to know what they were talking about, was a nightmare. We sat down, read the menu, and I quickly realized my mistake. We were sat just an inch away from another couple who was clearly very uncomfortable by our presence, the staff seemed bothered that we were there, and neither of us could understand the menu (in spite of us both knowing Italian).I mentioned that I saved the addresses of a few other restaurants and we quickly left. My second mistake was thinking that any of these places would have an available table on a Saturday night, even in spite of it being a bit earlier than the typical Italian mealtime. We walked around the city for what felt like forever but was probably more like 20-30 minutes. We were denied at each and every door as my heart began to break thinking that I had ruined our dinner. Walking in circles until we stumbled upon Ristorante Pizzeria Victoria (Via Augusto Righi, 9).

As the server came to the door to greet us my hesitation began to rise, we were at a tourist trap, clearly by the mixed crowd of exhausted tourists who also forgot to reserve their dinner table. I was too tired and hungry to resist so we stayed and ordered pasta. I’m happy to report that I was pleasantly surprised as my fresh made tagliatelle ai funghi porcini (yes I just can’t resist, it is one of my favorite dishes) quickly disappeared from my plate and into my stomach. My only complaint was the dry ambiance and wine that left something to be desired, but these are the lessons you learn when you travel and the things you need to let roll of your back. Travel is all about adaptation. 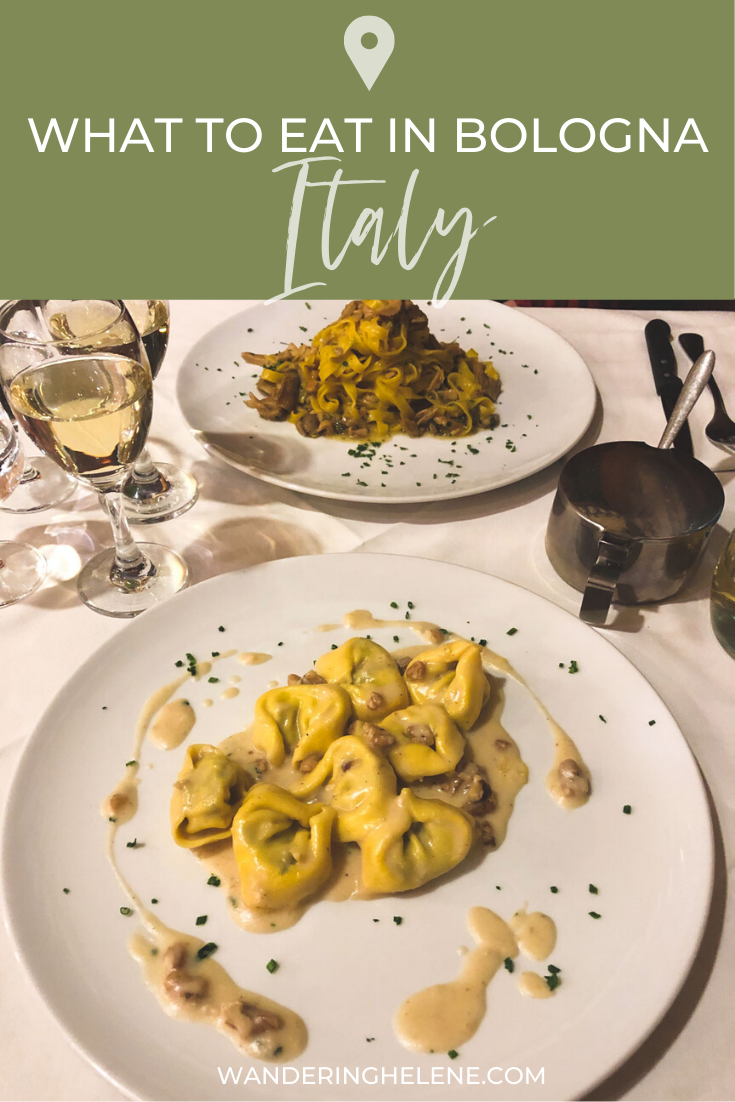 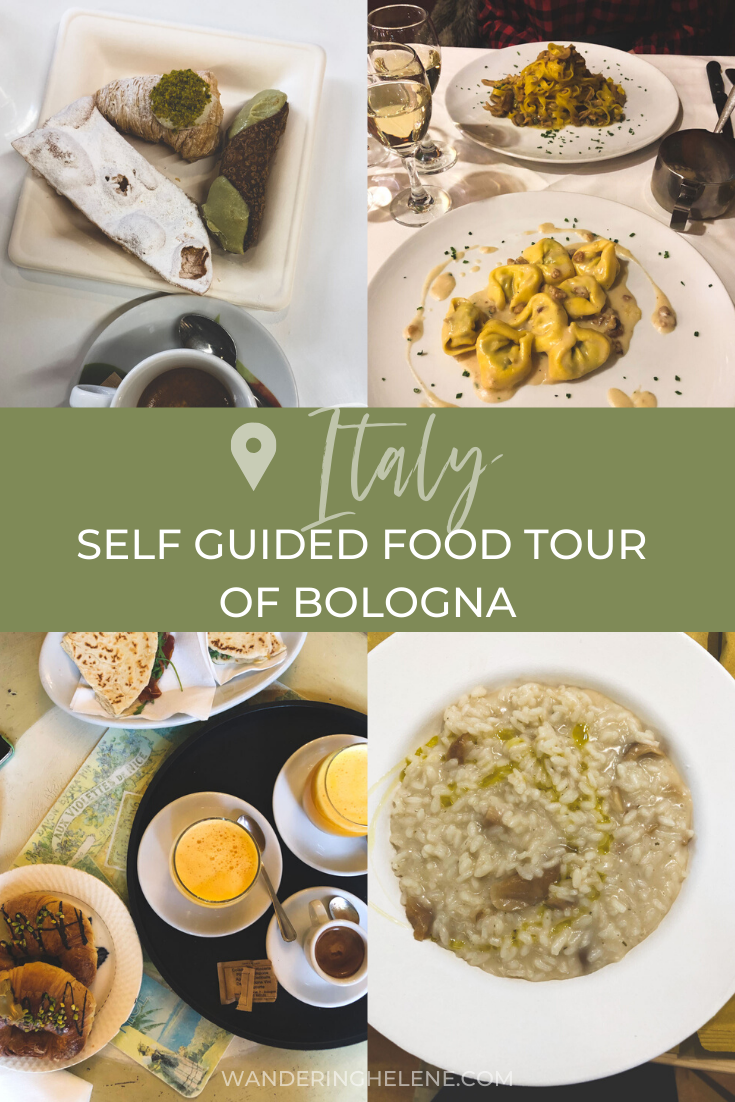 Thank you, as usual, for taking the time to read this post. I adore traveling to Italy and always have a memorable time whether it is less than 24 hours in Riva del Garda or a weekend in Venice. If you would like to see more of my travels follow me on Twitter or Instagram for daily updates. -Helene

2 thoughts on “Participating in Food Rituals in Bologna, Italy”