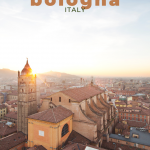 Bologna is one of my favorite cities in Italy and it is one of those places that gets better the more you visit. It never feels overrun by tourists like other cities of Italy, but do not mistake that for being quiet. Bologna is very much alive and vibrant.

There is a reason such a city has not one but three nicknames; La Grassa, La Dotta, and La Rossa. La Grassa means “the fat one” in reference to Bologna’s rich culinary history and achievements. The two most popular dishes are tagliatelle al ragù and tortellini in brodo. Both of which you must try if you visit.

The second nickname, La Dotta, means “the learned one” in reference to the University of Bologna, the oldest in the western world. It was found in 1088 and today is still one of the top learning institutions not only in Italy but in Europe.

La Rossa means “the red one” this refers to the terracotta porticoes and brick medieval buildings around Bologna, but also refers to the left-wing politics familiar to the city. It was the center for anti-fascist organizing during World War II and there are still frequent demonstrations and protests today.

Below I will share a range of things to do when spending one day in Bologna although preferably the city is enjoyed over a weekend.

One Day in Bologna: Things to Do, See, and Eat!

Have an Italian Breakfast

One of my favorite parts of living in Italy was going to the cafe in the morning for a cappuccino and fresh pastry (often a stuffed croissant). Every time I visit Italy I never miss the real breakfast experience; standing at the bar sipping my perfect temperature cappuccino amongst locals, and stuffing my face with sweet treats.

Recommendation: Opera Caffè e Tulipani (Via Alessandrini, 7) Not as traditional as others but they have delicious pasteries!

Piazza Maggiore is the perfect place to get the medieval feel for Bologna. This square is where Basilica di San Petronio can be found. It is the 6th largest church in Europe, and was first built in 1390. Also there is Palazzo d’Accursio (seen above, behind the Fountain of Neptune) which has held many forms throughout history. It became an important place of governing in 1336 and today welcomes visitors. Check visiting times here.

Piazza Maggiore is also connected to Piazza del Nettuno which is decorated by The Fountain of Neptune. Copies of this statue exist in Belgium, California (USA), Georgia, and Japan. The trident being held in this photo was the inspiration for Maserati logo that is still used today.

Get Lost in Alleyways

Just off Piazza Maggiore is a narrow street called Via Pescherie Vecchie. It is a sight to see with people passing by, small tables somehow squeezed between buildings, and the smell of fresh food with every step. If you follow this street until it ends you can go right or left down Via Drapperie. Here it will continue with antique shops, fresh produce, handmade pasta, and cut flowers. If you love to wander dynamic living streets then these two will be an absolute treat.

Recommended: Tamburini (Via Caprarie, 1) A Bologna favorite, great place to get charcuterie, wine, and a bite to eat.

One of the defining architectural features of Bologna is the porticoes. On the tentative list for UNESCO World Heritage these arched covered walkways dominate the city. Initially used to add more space to a property is now a way of life. Try this self-guided porticoes tour of Bologna to trace them across the city center.

Le Due Torri (The Two Towers) are the the symbol of Bologna. The two leaning towers are called Asinelli Tower (97.2 meters) and Garisenda Tower (48 meters). The former was once shorter but it was later extended while the latter began to lean too much that it was shortened over 3 meters.

For 5 Euros you can get a ticket to climb 498 stairs of the Asinelli Tower to gain a birdseye view over Bologna. It was built between 1109 and 1119 and is the tallest leaning medieval tower in the world.

Recommendation: Arrange your tickets in advance as they are limited by timeslots.

Basilica of San Domenico is one of the major churches of Bologna, if seen from the outside you might not consider going in. Inside is full of incredible works of art including early Michelangelo sculptures. Free to enter every day.

Graze Your Way Through Bologna

There are no shortages of amazing places to eat at in Bologna. You can read about a weekend I spent stuffing my face every moment I could. My favorite part of the city is that not every place is a sit down meal. There are hidden indoor marketplaces, bakeries selling pizza by the slice, or absolute perfection in the form of sliced meats and cheeses.

Recommendation: La Prosciutteria (Via Guglielmo Oberdan, 19/a) My favorite place to drink wine while slowly filling up on a range of meats, cheeses, fruit, and bread.

Next to the Basilica di San Petronio is the Museo Civico Archeologico (Archeological Civic Museum). Even if you are not typically a museum person, this one has very rare pieces that I think will be of interest.

The museum contains an extensive Etruscan collection, Greek and Roman art, and an impressive Egyptian antiquities collective. While the Egyptian collection only has 3500 items (compared to the British Museum’s 100,000+) it has significant and unique pieces. A favorite of mine were the mummified animals (seen in the bottom right photo) and five reliefs from the tomb of Horemheb at Saqqara.

Eataly is best described as an amusement park for food. Inside the large complex are stores, restaurants, learning stations to see how different food items are made, and outside there are gardens, animals, and even a vineyard. If you have one day to see Bologna, I would skip Eataly as the experience is more focused on all of Italy rather than specifically Bologna.

Explore the Gates and Towers of Bologna

Over 100 towers were built in Bologna during the Middle Ages but today there are only 22. Twenty two is still a lot of towers. They are are sprinkled across the city giving a unique view of the landscape like Medieval skyscrapers. The towers were often financed by wealthy families in Bologna although their exact purpose is still not clear (either for defense or flaunting of wealth).

Bologna was a walled city in the 14th century with 12 gates protecting the city. Ten gates are all that remain today. I highly recommend visiting Porta Saragozza as it is the most impressive.

The Pinacoteca Nazionale has collections of paintings from this region during the 13th and 14th centuries as well as some from the 17th century. There is a significant focus on religious themes.

Located south-west and 300 meters above Bologna there is the Sanctuary of the Madonna di San Luca. What is so significant about this place is that you can walk down the Portico di San Luca, a 3.8 km long covered walkway. With 666 arches it is the world’s longest portico.

A Map of How to Spend One Day in Bologna

Thank you for taking the time to read Wandering Helene. Please feel free to leave any comments or questions below and safe travels!